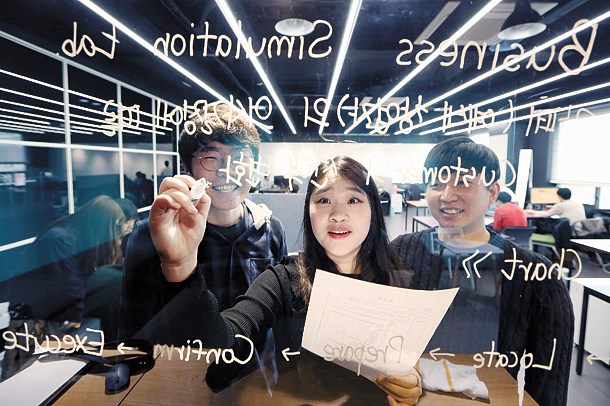 From left: Lee Jae-hong, Kim Eun-jin and Kang Hee-yun, students at Hanyang University, discuss how to determine future small-business store locations. As long as they finish their project, they will receive credit in the Project Semester or “Self-Designed” semester without attending classes.[CHO MUN-GYU]

Twenty-three-year-old Kim Eun-jin clocks in every day at 9 a.m. and out at 5 p.m. Kim is not working in the “real world;” instead she is a student at the College of Business at Hanyang University’s recent Project Semester program.

The program opens its doors each year to 50 students and by the end of a series of interviews, 25 remain. The university provides an office space and a 2 million won ($1,782) stipend to students involved in their projects. Some examples are the establishment of an e-commerce site and a business information platform.

In Kim’s case, she is involved in developing a program to help potential small-business owners identify the best storefront locations. When prospective small business owners input the pertinent location and their concept, the computer program will calculate the expected demographic and sales figures.

Entering the program was a win-win for Kim. Not only is she engaging in practical study, she will receive 15 credits from the university following her project’s conclusion, more than enough for her remaining nine credit requirement. “I’ve learned business administration for these four years, yet I’ve never tackled an issue on-site,” said Kim. “I think this will be a valuable experience.”

“In the age of the fourth industrial revolution,” said Chang Suk-gwon, Kim’s adviser and the president of the College of Business, “learning through practice is more effective than for professors to lecture and the students to listen in a one-way street.”

Hanyang University is not alone, as universities all over Korea are introducing similar programs where students receive credit for carrying out independent projects.

The first school to introduce a so-called “Self-Designed” semester was Ajou University early last year. There was a lot of interest at their presentation showcasing the results of the first Ajou University Paran Semester, with 10 officials from other universities in attendance.

Before the introduction of the semester, there was debate on whether students could follow through and whether these programs could be as educationally effective as conventional courses. However, Kim Dong-yeon, president of Ajou University, received the cooperation of professors and the support of the student body.

“Self-designed” semesters are becoming an entrepreneurial stepping stone. Twenty-two-year-old Ji Yeong-rim and nine others participated in the production of an online web drama and successfully streamed it to the general public through a portal TV cast.

“My objective was to experience actually making a drama,” said Ji, who will now be working as a mobile video business producer, “so it was a big help.”

Oh Bok-seong, 25, who studies mechanical engineering, developed virtual reality hardware for games and realized his entrepreneurial dreams by receiving 100 million won from the government. Oh said, “I had the help of my adviser and other students in regards to the venture and business administration know-how throughout the project.”