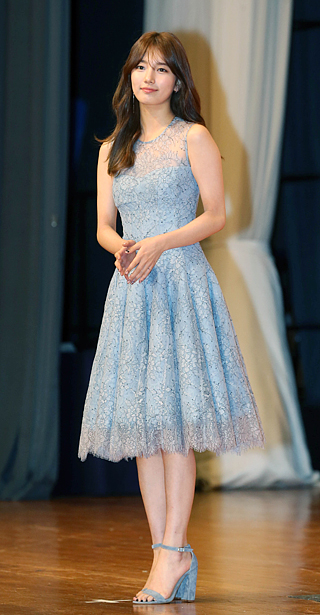 The singer-actress who is one of the talent agency’s most recognizable faces has completed a seven-year contract with JYP, and all eyes are now on whether she will renew it or seek another agency.

Suzy debuted in 2010 with girl group Miss A after a scout from JYP recruited her following a failed attempt to appear on the audition program “Superstar K.”

Since then, Suzy’s career has seen nothing but highs.

While Miss A produced several hit songs, Suzy really made a name for herself when she starred in the 2012 film “Architecture 101.” Her role as the girl next door earned her the moniker “the nation’s first love,” and it was the beginning of an acting career that would lead to two more movies, one still in production, and nine television dramas.

She is also one of the most sought-after models, boasting an astounding 37 appearances in commercials to date.

Although it is customary for stars to renew contracts at least six months before they expire, Suzy is in a position to weigh offers.

JYP is still “in discussions” regarding the contract. With Suzy currently filming for the new drama “While You Were Sleeping,” sources in the entertainment industry believe she might wait until after production is complete to make her decision.