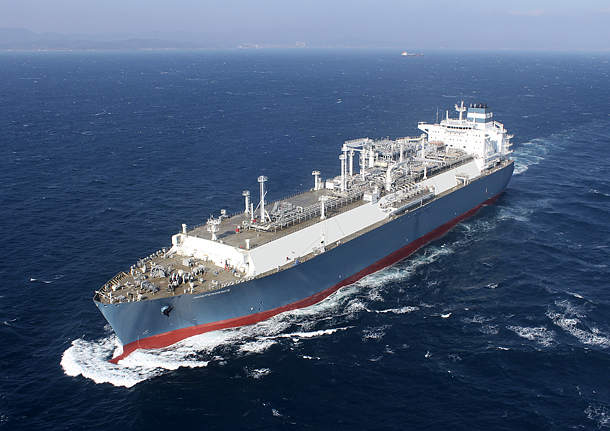 It will be the world’s first LNG-fueled aframax tanker when it is delivered in the third quarter of 2018, according to the company. Aframax refers to midsize tankers that are bigger than coastal tankers which trade between locations on the same island or continent.

“As demand for eco-friendly ships increases with tightening environmental regulations, we will further accelerate our efforts to win eco-friendly ship orders,” Hyundai Samho said in a statement last Monday.

Such growing demand for greener ships follows the International Maritime Organization’s announcement last year to lower the maximum sulfur content of ship fuel from 3.5 percent to 0.5 percent by 2020 and cut emissions overall.

“Bunker C fuel oil is no longer an option after being used for the past five decades,” said Lee Kyung-ja, an analyst at Korea Investment & Securities, in a report earlier this month. “LNG-fueled ships meet all the restrictions mentioned above while also featuring durability up to 30 years.”

According to the investment firm, 86 LNG-fueled ships are currently in operation globally and 93 are being built, with demand growing continuously. The world’s biggest rules and standards society, DNV-GL, expects 200 orders annually for LNG carriers in the next five years.

The increase in LNG-powered ships also means there will be more orders for LNG carriers, floating LNG bunkering terminals and LNG bunkering shuttles where ships can fill up, and other LNG-related infrastructure and technology. Doosan Infracore, a supplier of engines, signed a memorandum of understanding with the Korea Gas Corporation and Samjin Yard on Tuesday to develop LNG engines for small vessels.

Orders for LNG-FSRUs, or floating storage and regasification units, which are used to gasify LNG at sea for delivery to consumers on land, is also growing. In January, Samsung Heavy Industries inked an order worth 270 billion won ($152 million) to supply a unit to Norway’s Hoegh LNG by 2019. Hyundai Heavy Industries also won an order to supply an LNG-FSRU earlier this year.

These units are deemed more economical and convenient compared to building an LNG terminal on land, according to Samsung Heavy Industries, as it takes about twice the time and cost to build facilities on land.