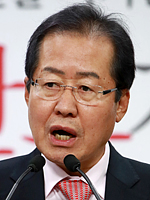 South Gyeongsang Province Gov. Hong Joon-pyo on Friday clinched the presidential nomination of the conservative Liberty Korea Party for the May 9 election, bracing for an uphill battle against powerful liberal rivals.

The former ruling party announced its flag-bearer during a national convention in Seoul based on the combined results of a vote by full-time party members and opinion polls conducted for the past week.

“With your power, I will become a confident president, and stabilize the nation and make the Republic of Korea an affluent country,” he added.

During the speech, Hong also said he would seek to unify conservative forces, take a hard-line stance against a nuclear North Korea and enhance ordinary citizens’ livelihoods.

In particular, Hong said that if elected president, he would seek negotiations with the United States to redeploy its tactical nuclear weapons to South Korea and enable Seoul to share control of the nuclear arms in the same way Washington and several NATO member nations have done.

Hong’s win came as the election landscape is seen heavily weighted in favor of the liberal bloc in the wake of a massive corruption scandal involving Park.