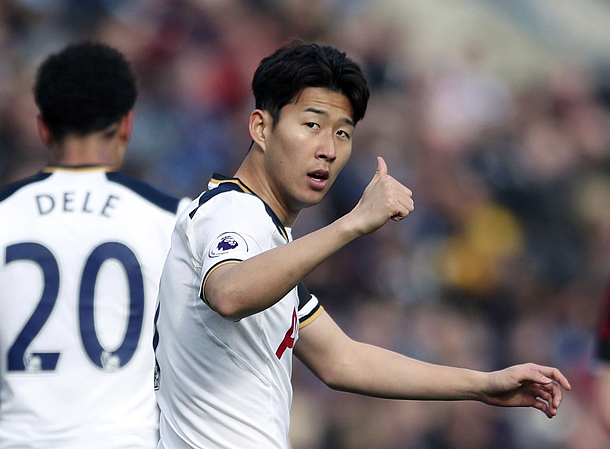 Son Heung-min of Tottenham Hotspur gestures after scoring the team’s second goal of the game during the English Premier League football match against Burnley F.C. at Turf Moor Stadium in Burnley, England, on Saturday. [AP/YONHAP]

Son Heung-min of Tottenham Hotspurs scored his eighth Premier League goal of the season. With the goal, he helped Spurs win 2-0 against Burnley F.C. at Turf Moore on Saturday.

It only took Son, who was subbed in at the 73rd minute, four minutes to score a goal. Son successfully scored Spurs’ second goal with a left-foot assist by Dele Alli in the 77th minute.

This is Son’s first goal since he completed a hat trick on March 13 against Millwall FC during the English FA Cup quarterfinal match. In Premier League matches, this marks Son’s first goal in two months, since Tottenham’s match against Manchester United on Jan. 22.

Tottenham’s first goal was scored by Eric Dier in the 66th minute. With that, Spurs improved to 62 points, recording 18 wins, eight ties and three losses to shrink the gap with the leader, Chelsea, who is at 69 points.

Son, who played for the Korean national team in the final qualification match, redeemed himself from a disappointing match against Syria on Tuesday. Despite the high expectations the Korean football fans had on Son prior to the match, he was not able to score a goal or utilize his explosive speed throughout the game. But his performance against Burnley F.C. was nothing like what he did for the Korean national football team.

Tottenham will play their next Premier League match against Swansea City at the Liberty Stadium on April 5.