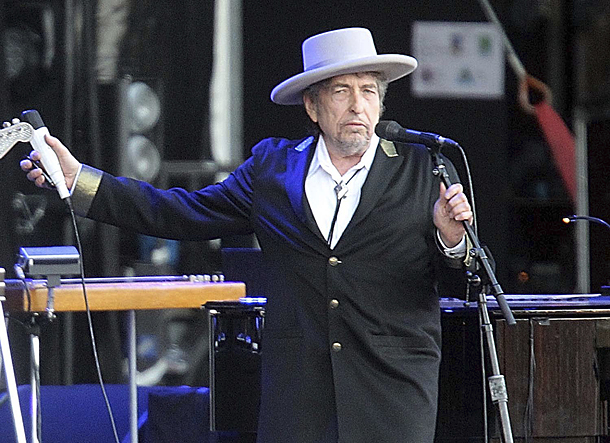 STOCKHOLM - Bob Dylan finally has his hands on his Nobel Literature diploma and medal.

Klas Ostergren, a member of the Swedish Academy, said the 75-year-old American singer-songwriter received his award during a small gathering Saturday afternoon at a hotel next to the conference center where Dylan was performing a concert later that night.

Ostergren told The Associated Press that the ceremony was a small, intimate event in line with the singer’s wishes, with just academy members and a member of Dylan’s staff attending.

Other members of the academy told Swedish media that Dylan seemed pleased by the award.

During his show hours later, Dylan made no reference to the Nobel award, simply performing a set blending old classics with tunes from his more recent albums.

Dylan had declined the invitation to attend the traditional Nobel Prize banquet and ceremony on Dec. 10 - the date of Alfred Nobel’s death - pleading other commitments.

But in order to receive the award worth 8 million kronor ($894,800), Dylan must give a lecture within six months from Dec. 10. He has said he will not give his Nobel lecture this weekend but a recorded version of it will be sent later.

“I think he has said it all already as you heard in the acceptance speech and you know, Dylan didn’t apply for the Nobel prize. People seem to forget that. It wasn’t a competition, he didn’t ask for it, he was bestowed it. It’s not for the giver of a gift to expect something in return,” said Shmuel Burger, from Israel, a 61-year-old physician.

The 2016 Nobel Prize in Literature was awarded to Dylan “for having created new poetic expressions within the great American song tradition.” He had expressed awe at receiving the Nobel Prize and thanked the Swedish Academy for including him among the “giants” of writing.

Besides his two concerts in Stockholm, Dylan will also play in the southwestern city of Lund on April 9.