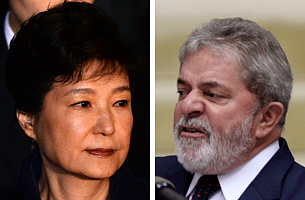 On July 14, 2004, I met Luiz Inácio Lula da Silva, then-president of Brazil, at a Samsung Electronics factory outside of Sao Paolo, Brazil. Lula, a former factory worker, was popular domestically and internationally. He was full of confidence. Hundreds of workers in blue uniforms came up to the escort line to see him. He approached them, grabbing hands and giving them pats on the back. Some even showed tears.

But on March 14, Lula stood trial as he was indicted last year for charges associated with bribery and obstruction of justice during his January 2003 to December 2010 presidency. At his first court appearance, he denied all charges. He reportedly was upset and aggressive. Outside the court, supporters gathered and shouted, “Lula! Brazil!” Still an influential politician, he has declared his candidacy for the presidential election in 2018.

She was elected president, but now she is in custody. A poll by a newspaper company based in Daegu, her political stronghold, right before her arrest, showed that 49.5 percent of the respondents support her detention. In the last presidential election, Park earned 84.14 percent of the votes in the region, highest among the 17 metropolitan areas and provinces.

Former President Park will stand before the court once prosecutors indict her. What will she say? She is likely to deny all charges just as Lula did. Her supporters will still be shouting out “Park Geun-hye! Korea!”

Lula lost the little finger on his left hand in a factory accident. He did not even graduate from elementary school. Park Geun-hye was a daughter of a president and spent 18 years like a princess. The two former presidents have different backgrounds, but their fates are the same as they await judgment.

It is the voters who elected Lula and Park. While the two may have accomplished some, voters actually didn’t know who they really were were voted for. In an election, voters often make choices without understanding the candidates’ qualifications and characters. People are even less informed in the coming presidential election.

Less than 40 days are left until the May 9 election. Parties are making nominations, but voters don’t have enough time to learn about candidates. It is up to the voters to avoid picking someone like Lula or Park again. The only way is to exercise the rights and duties of the voters faithfully. Voters should make a prudent choice and watch the administration closely from day one.