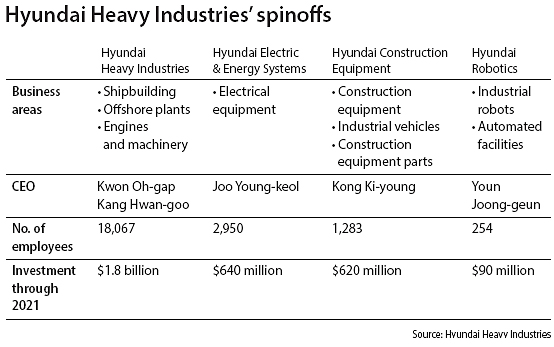 The four companies previously under Hyundai Heavy Industries Group plan to invest a collective $3.15 billion over the next five years in technological development to diversify beyond their bread-and-butter shipbuilding business.

Previously, all four businesses were under Hyundai Heavy Industries Group.

Considering about 200 billion won ($180 million) was spent on tech development by the group last year, the approximately $630 million annual investment over the next five years is a bold move. The companies want to more than double the R&D staff from the current 4,000 to 10,000 by 2021.

“Today marks a new chapter in our history, and the three newly established companies will make utmost efforts to rank in the global top five in their respective fields by making quality and technology top priorities,” said Kwon Oh-gap, vice chairman and CEO of Hyundai Heavy Industries, at a tree planting ceremony to commemorate the spinoffs’ first day as separate companies at Hyundai Heavy’s shipyard in Ulsan.

Of the $3.15 billion investment, the shipbuilder will use $1.8 billion to develop eco-friendly and “smart” ships with more digitalized features. It also wants to enhance its offshore engineering capabilities and establish a smart shipyard. Although orders are still slow amid a global economic slump, the heavy investment is seen as a pre-emptive move to prepare for a digital transformation that’s likely to sweep the industry.

While analysts forecast a brighter outlook for the shipbuilder after spinning off its non-shipbuilding businesses, the mother company is still struggling with slow, albeit recovering, market demand and prolonged wage negotiations with its labor union that started last May. Hyundai Heavy Industries’ management has been asking workers to share the burden of the company’s restructuring efforts and return 20 percent of their year’s salary, but the union has rejected the idea.

In the meantime, trading of the group’s shares will be suspended through May 9 as the new companies prepare to list on the market by May 10.