Japanese envoys to Seoul and Busan to return

Japanese envoys to Seoul and Busan to return 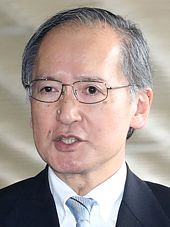 Japan’s ambassador to Seoul and consul general to Busan are expected to return to Korea on Tuesday after being recalled to Tokyo nearly three months ago to protest the installation of a statue symbolizing victims of wartime sexual slavery.

Japanese Foreign Minister Fumio Kishida announced on Monday afternoon that Ambassador to Seoul Yasumasa Nagamine and Yasuhiro Morimoto, Japan’s consul general in Busan, will return to their posts taking into consideration the upcoming South Korean presidential elections and Pyongyang’s provocations, as well as to continue to effectively protest the statue issue.

Kishida said in a press conference in Tokyo that because of former President Park Geun-hye’s dismissal and recent arrest and the upcoming Korean presidential elections on May 9, “We have to put more effort into collecting information and fully preparing for the launch of the next administration.”

He added there is also a need to closely liaise with the South Korean government for “a high level of close information exchange” between Seoul and Tokyo to respond to the North Korea nuclear and missile threat.

Nagamine and Morimoto left to Japan on Jan. 9, after Tokyo temporarily recalled them to protest against the installation of a bronze statue representing victims of the Japanese military’s sexual slavery during World War II, euphemistically referred to as comfort women, near the back gate of the Japanese consulate in Busan, at the end of last year.

The statue in Busan was installed by a local civic organization and built through individual donations, and Tokyo has demanded for its removal, along with the bronze Peace Monument in front of the Japanese Embassy in Seoul. The Korean government has said ultimately the removal of such statues is up to civic organizations but has suggested to them to consider moving the statue to a “more appropriate location.”

Kishida said that Nagamine has to speak with Hwang Kyo-ahn, the acting president, on the issue of the removal of the comfort women statue being carried on to the next administration.

The foreign minister also called for the faithful implementation of the 2015 bilateral agreement to resolve the sexual slavery issue and said, “We have protested about the comfort women issue through diplomatic channels and demanded to abide by the Korea-Japan agreement, but there was no result.”

Nagamine’s return comes 85 days after he left Seoul, the longest period of time a Japanese top diplomat has been recalled amid various territorial and historical rows that have surrounded the two countries.

A Korean Ministry of Foreign Affairs official confirmed Monday that the Japanese government decided to return the diplomats to their posts here and said, “We look forward to closer communication between the two countries through the return of Ambassador Nagamine.”

The Korean and Japanese foreign ministries struck a deal to resolve the so-called comfort women issue on Dec. 28, 2015, consisting of the Japanese prime minister’s apology and a 1 billion yen ($8.98 million) fund for the victims.