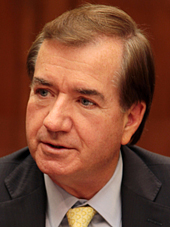 Rep. Ed Royce, chairman of the House Foreign Affairs Committee, said that he has personally raised the issue of Beijing’s retaliatory measures against Seoul over the deployment of the Terminal High Altitude Area Defense antimissile system, or Thaad, with the Chinese government.

“I raised that issue with the government of China and we are taking action with respect to that issue,” Royce, a Republican of California, told the JoongAng Ilbo in a phone interview last week, explaining that such discussions are happening “at the highest levels.”

China has undertaken a series of retaliatory measures against Korean goods and businesses, tourism and the entertainment industry over the move to deploy the U.S.-led Thaad antimissile system to Seongju County in North Gyeongsang within the year.

“We have had those discussions in order to express the fact that those types of actions should not be occurring,” he said, referring to China’s punitive measures targeting Korea, an issue Seoul has taken up with the World Trade Organization.

“At the same time,” Royce added, “our Secretary of State [Rex Tillerson] is having discussions at the highest levels in China, as you know, about all of us complying together with the sanctions passed by the UN Security Council. We must all be part of the solution here, working together, the international community.”

“I think a large part of the focus of the meeting will be on this threat that Kim Jong-un’s nuclear arsenal poses to destabilizing Asia and the threat it poses to the world, frankly,” said Royce.

He also spoke of the bipartisan bills on North Korea passed in the U.S. House Foreign Affairs Committee last Wednesday, imposing harsher sanctions on Pyongyang, condemning its ICBM development and relisting it as a state sponsor of terrorism. It also approved a resolution urging China to cease its retaliatory measures against South Korea over the deployment of Thaad.

Royce pointed to a “new urgency” following the assassination of North Korean leader Kim Jong-un’s half brother, Kim Jong-nam, as well as a recent report from the United Nations “about the North Korean advances on their weapons program while they’re circumventing, or cheating, or getting around” the current UN sanctions regime.

“Democrats and Republicans really at this time feel that we have to respond to this new UN report, making it clear that North Korea is using these increasingly sophisticated tactics to evade existing sanctions that networks middlemen and banks are succeeding moving money and people and arms and material in for the weapons program,” said Royce, who sponsored the Korean Interdiction and Modernization of Sanctions Act.

He emphasized that the enforcement of current sanctions by some nations “remains insufficient.”

The chairman continued, “The bill that I passed, my own legislation along with Mr. Eliot Engel from New York, will expand U.S. sanctions to target these front companies, these enablers, so it expands the administration’s authority to use sanctions on the emerging threats of North Korea,” including cyber threats and North Korean slave labor, a lucrative cash source for the regime.

Royce addressed the analysis of recent satellite images that indicate Kim Jong-un could be preparing for a sixth nuclear test, saying, “the speed with which North Korea’s weapons programs are advancing is a real game-changer.”

He also said that while discussing points with China, with respect to the reaction to North Korea, “I think it’s critical that the United States and South Korea stand united in acting to counter these threats.”