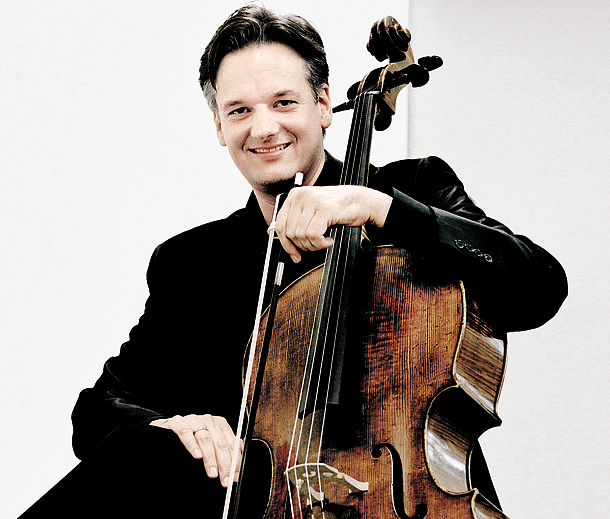 Late Korean artist Isang Yun (1917-95) has a special place in the hearts of not just the citizens of Tongyeong, but also artists in Europe, especially Germany, where Yun became a citizen in 1971. When Yun was kidnapped in West Germany in 1967 by the Korean Central Intelligence Agency and sentenced to death after being accused of treason for having visited North Korea four years earlier, it was a petition from his international friends and artists, led by Igor Stravinsky as well as the West German Government’s formal protests that pressured the South Korean government to release Yun in 1969.

To celebrate the late musician’s 100th birthday, many international artists participated in this year’s Tongyeong International Music Festival (TIMF) which kicked off on March 31 at Tongyeong Concert Hall. One of the artists was German cellist Jens Peter Maintz. He is currently the principal cello in the Lucerne Festival Orchestra and a professor at the Universitat der Kunste Berlin, or the Berlin University of the Arts, where Yun was also a professor.

Although he refused to call himself an Isang Yun specialist, Maintz recorded Yun’s “Cello Concerto” in 2003, which remains one of the two existing recordings of the piece. He was also on the jury for the International Isangyun Competition for cello in 2009, and says he prepares his students in Berlin for the competition regularly. Many of his students have won the competition.

To pay homage to the late artist Yun, Maintz will perform as a cellist in the Isang Yun Soloists Berlin on Wednesday and play solo on Thursday. To discuss his upcoming concerts and his thoughts on Yun, the Korean JoongAng Daily sat down with Maintz for an interview on Saturday at the Tongyeong Concert Hall in Tongyeong, south Gyeongsang. Followings are edited excerpts from the interview.

Q.For your solo concert on Thursday, you are playing Yun’s three etudes and two of Bach’s cello suites. Can you tell the readers about the pieces?

A. Isang Yun’s etudes are his very late pieces. Yun passed away about two months after the etudes were premiered in 1995. So they have a very specific style and actually, towards the ends of his life, obviously, he tended towards simplicity again. If you just take one look into the score of Yun’s “Images,” for example, that we, the Isang Yun Soloists Berlin, will play on Wednesday, it’s extremely complicated. It’s hugely demanding, technically high level and also rhythmically hard to harmonize together. But if you look at his etudes, they have a very simple style but they are very beautiful. There’s even some kind of humor in them. I have the feeling that the music expresses the feeling of looking back on one’s life in a very calm way. Yun was also a cellist so obviously he knew a lot of cello pieces. It’s really nice to find that each one of the etudes are upon an idea. For example, the first one called “Legato,” is something that all cellists really look for all their life. I decided to perform two composers’ pieces together because I believe Yun’s etudes are befitting of Bach’s suites. I certainly hope the audience can differentiate which is which, because I’m going to play them in one breath. Actually, the audience should actually not clap in between the pieces.

So what you are saying is you are going to play one of Yun’s etudes, then play Bach’s suite, then another etude of Yun and then Bach?

Yes. I am going to start with Yun’s Etude No. 1 “Legato,” and then play “Bach: Suite No. 2 in D Minor,” then another Etude No. 2 “Leggiero” by Yun and then “Bach: Suite No. 6 in D Major.” Finally, I’m finishing off with Yun’s Etude No. 5 called “Dolce.” The etudes are quite short and Bach’s suites are longer. It’s like the etudes are the movements of Bach’s conception somehow. They really fit well together.

Normally one would end the recital with Bach’s “Suite No. 6,” but after that I play the “Dolce.” It’s like the idea of having an arch that starts from legato, followed by cantabile, then rises up to leggiero, which means playfulness and then the powerful and brilliant suite No. 6, finished off with the sweet “Dolce” by Yun.

When I saw Yun’s “Cello Concerto” played by Tongyeong Festival Orchestra accompanied by cellist Nicolas Altstaedt, I was really amazed at how much energy you need to put in, physically, for the cellist to play the piece. Is it always the case for Yun’s cello pieces?

I know Yun’s “Cello Concerto” very well because I recorded it and it’s a very demanding piece. Indeed, it needs a lot of energy. I would say all music requires emotional investment and engagement. But of course, physically, the solo parts of Yun’s “Cello Concerto” are extremely demanding, more demanding than the etudes that I’m going to play in between Bach on Thursday for example. Because of the subject for the “Cello Concerto,” since it’s very autobiographical, there are situations that are extremely painful and aggressive. To [convey this through] the cello, of course you need to play it with great energy, or else, you won’t be able to deliver the message.

Why is Yun and his music recognized internationally?

He has quite a unique combination of very specific styles that are also rooted in Korean traditional music. Sometimes, we have to really play on the classical instruments as if we are playing on a traditional Korean instrument. Yun had a special way to do pizzicato on cello, trying to make it sound like Korea’s gayageum (traditional zither). And he, of course, fuses that somehow with the modern. It’s the combination of very modern and very old. So this, for me is what makes his music very special.

You are performing at the TIMF for the first time. How do you feel about it?

The people of Tongyeong can be very proud of having such a festival in their town, especially with this new hall. If you look at the programs, there are many international stars who are coming to perform here. I think it’ll be great if not just the people of Tongyeong but people all over the world can come here and see what’s going on in this coastal city because it’s very special. In fact, it’s actually one of the finest festival programs I’ve seen.