‘All the wild reports about the Sewol are fake news’

‘All the wild reports about the Sewol are fake news’ 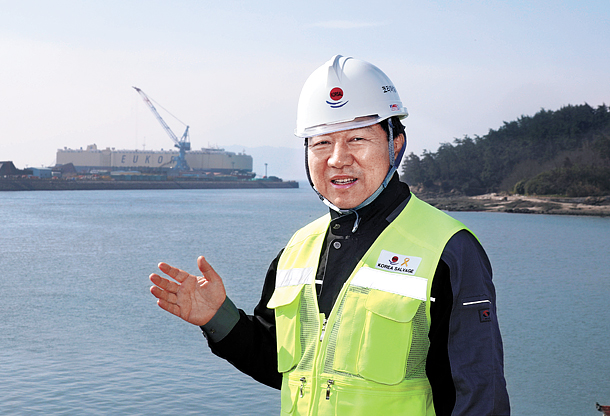 The Sewol ferry is now resting in the light of day and awaiting further operations at Mokpo New Port, South Jeolla, under the joint site control center of government agencies established by the Korean central government. A team of 105 people will be charged with facilitating the collection of articles left by the victims, searching for the remains of the nine missing victims and examining the ship.

An expert eight-person special investigation committee on the Sewol will also begin a fact-finding project. The raising of the ship was conducted by China’s Shanghai Salvage, but Korea Salvage will take responsibility for the work on the ground.

Korea Salvage will conduct on-site work in a series of steps. The JoongAng Ilbo had an interview with Ryu Chan-yeol, 63, CEO of Korea Salvage, regarding his concerns and plans for the vessel’s recovery, the process of organizing the project and the topic of shipwrecks in general at Mokpo New Port.


Q. How long does it take to drag the Sewol onto the land?

A. It will take four to five days to eliminate the ship welding and oil. After that, the ship will be placed on a module transporter, the Self Propelled Modular Transporter (SPMT), and will be moved coinciding with the neap tide starting after April 5. One can think of the module transporter like a large full-sized trailer with 500 wheels. The transporter will go underneath the Sewol and drag it onto land. After matching the semi-submersible with the height of the wharf at neap tide, the module will then move it. The process will take two to three days since it must been done slowly.


After moving the Sewol onto the land, what will follow?

Searching for remains of the nine missing victims, recovering articles belonging to the victims, examining the wreck and so on. If the ship is cut apart, it will take three months or so, but if that is not the case, it will be over six months. The eight-member Sewol fact-finding body will listen to the opinions of the bereaved families and will come to us for consultation. We will find the best means by taking into account the opinions of the committee, the missing victims’ families and the Oceans Ministry.


The most important subject is the remains of the missing victims.

We can definitely locate them if they were in the interior of the ship at the moment of the sinking. Japan’s Ehime Maru sank to a depth of 700 meters (2,296 feet) in 2001, yet eight persons’ remains were recovered within eight months.


Is there any good in preserving the Sewol?

It is a difficult task. The Sewol is an enormous ship, 145 meters in length, 24 meters in height and 22 meters in width. The work on moving the ship to land will not be easy for historical preservation. Another idea is to have partial preservation; for example, take a portion of the ship to preserve and exhibit it for remembrance and edification.


What came to your mind when the Sewol wreck emerged from the sea on March 23?

I recalled the victims and I felt grief when I thought of the irresponsible captain, Lee Jun-seok. And then I thought of Shanghai Salvage. It was an outcome born of strenuous effort. One shouldn’t treat the recovery lightly. Asking why something this easy took three years is a great discourtesy.


Still, it does feel it has taken too long. Conspiracies and doubts abound.

The recovery was decided in April 2015. Korea Salvage and a Dutch company, SMIT, formed a consortium and participated in the bidding, but Shanghai Salvage was selected as it had the lowest bidding price of 85.1 billion won ($76.5 million).

The tidal currents of the Maenggol Channel are problematic, but the main problem is visibility. In the media, there’s not much talk about visibility, but in actuality, it is to the point that divers cannot see their own hands. It is no different from working with one’s eyes shut. The recovery depends 70 percent on circumstances, 30 percent on the people. It is difficult work.


There is a story floating around that the recovery was pushed ahead rapidly after the expulsion of former President Park Geun-hye.

All the wild reports about the Sewol are fake news. The recovery was decided in April 2015, and after three months, Shanghai Salvage was selected for the recovery on July 15. The preparations for the tasks, such as pumping out the oil and equipment procurement, were mobilized in August and September.

It was difficult to work during the months of December to February. So, during that period, workable days were 10 days at most. Considering the window of opportunity was just seven months from March to November, that is how 2015 passed.


Initially, wasn’t the recovery supposed to be concluded in 2016?

Shanghai Salvage inserted a support lifting beam underneath the bottom of the Sewol’s hull. The original plan was to insert the beam before the typhoon season at the end of May. I understand that Shanghai Salvage intended to conduct the recovery in July or August. However, the insertion of the lifting beams wasn’t easy.

It was difficult raising the ferry, and drilling below the ship was difficult due to the bedrock. In the end, we tackled floating the stern. The task started in August or September in 2016 and it was all completed by December 2016. And then, the weather in January and February wasn’t optimal, so they were barely able to get the work done and commence with the recovery. Still, can you believe this?

The original contract was until Dec. 31, 2016. They were contracted for 85.1 billion won, but now they will be paid for a staggering amount of liquidated damages. Including 300 million in personnel costs, the additional daily expenses are over 1.5 billion won.

The calculation is that they have experienced at least 100 billion won in losses. Shanghai Salvage is a state-run government company affiliated with China’s Ministry of Transport, which was established in 1951. Their human resources for salvaging are more than 1,400 people. Regardless of whether it’s an affiliate of the Chinese government, do you think they’d put up with that loss?


Who is leading the scene?

The overall person in charge is the Chinese salvage master. The maritime engineering specialists precisely calculate the structure and strength of the ship, the dive masters elaborate on the underwater conditions and the salvage master will decide orders such as “cut and drain the water and weld.” The mobilized personnel at the beginning were 150 people and reached 450 people near the end.


The 8,000-ton Sewol was resting on the seabed 44 meters below the surface. Isn’t this an uncommon salvage case?

The international convention is to not salvage a ship unless the wreck has an impact on the underwater environment or on the navigation of ships. The ship’s insurance company is covering the salvage costs, and if they can’t repair it and re-use it, the company will step back. The Cheonan was recovered as a military objective, but the Sewol sinking, with its unrecovered victims, and the fact that the cause of its sinking remains unknown, is an exceptional case.


Is there a similar case in foreign countries?

The sinking of the training ship of the Ehime Maru of the Uwajima Fisheries High School in Shikoku, Japan, is a representative case. It collided with the USS Greeneville, a nuclear submarine, and sank in the vicinity of Hawaii to 700 meters below surface. There were nine missing persons and the ship was 500 tons and 58 meters long. After recovering remains of the eight missing persons, the ship was made to sink to 1,000 meters below.


Do you think it collided with a submarine?

If it collided, do you think the sailors onboard would have done nothing? The mostly university-aged sailors would have been discharged, so isn’t it weird that there wasn’t a single whistleblower? There is not even a half-hearted apology on the conduct of these conspiracy theorists.


There is a controversy about the rudder being bent from the left to the right.

There are those who are proposing a collision by citing this fact, but that is unreasonable. If the helmsman rotated the steering wheel to starboard according to the direction of the navigator, it is obvious that it stopped at that state. The rudder did not change due to human intervention. Once the investigation is concluded, all will be clear.


There are people asking why we selected a Chinese company considering Korea is a shipbuilding power.

It’s shameful. Korea must nurture proper rescue and salvage operations. This time, there wasn’t any Korean-made equipment used, except for corrosives or liquid petroleum.

The semi-submersible ship is from the Netherlands and the rest is Chinese equipment. It can actually be a relief that a Chinese company conducted the recovery work. If our company was selected, how politically tumultuous could it have been? Shanghai Salvage did it independently, and we gained know-how during the salvage.