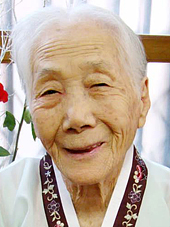 The Korean Council for the Women Drafted for Military Sexual Slavery by Japan said Lee Soon-deok died at around 7:30 a.m. at the age of 99.

Her death leaves only 38 surviving victims of Japan’s brutal wartime crime. Initially, 238 women were on the list of government-registered former sex slaves.

Historians estimate that up to 200,000 women, many of them Korean, were forced to work in front-line brothels for Japanese troops during World War II. Japan colonized Korea from 1910-45.