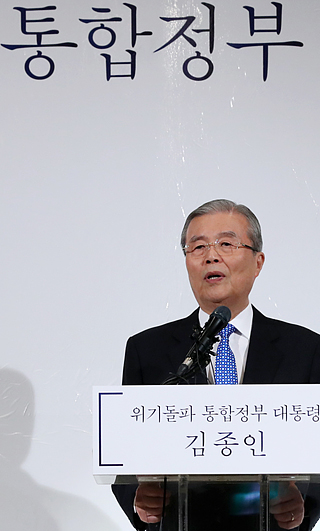 “As the best mediator of various factions and figures, I will bring stability to the country and comfort to the people,” Kim said in a ceremony to launch his campaign. “I will run without a party nomination in the upcoming election,” he said.

In his presidential bid, Kim made clear his intention to form an electoral alliance against Moon Jae-in, the Democratic Party’s candidate and the presidential frontrunner who consistently topped the polls over the past months. The 76-year-old economist was recruited by Moon and delivered the party a victory in April 2016 general election, but the two split bitterly.

He worked as an interim chief of the party and a proportional representative, but he quit the party last month, giving up his National Assembly seat. For a long time, Kim protested the way the Democratic Party has been run, which he has viewed as dominated by Moon loyalists.

“We are electing a president who has to deal with this crisis, and a candidate, who treats our entire past as an accumulated evil, is now calling himself the destined winner,” Kim said, referring to Moon. “The upcoming election is a battle between the capable man who wants to unite powers and an incompetent man who wants to do everything alone.”

Referring to Moon’s failure to read “3-D printer” correctly during a recent TV debate, Kim said it was not a simple slip of tongue, but a demonstration of his lack of ability. “For a person in charge of a government, incompetence is a sin. We must not let another person of no ability to run the country.”

Kim said Moon is trying to use the idea of justice to instigate hostility. “That will not solve endless tasks before us,” he said. “They are arguing to change the administration, although it already failed and buried in the past. They have no judgment.”

Kim, then, said a coalition government will be he answer for Korea’s future. “If voters elect me for this goal, the president will be a mediator, not a ruler, and the politics of enabling all Korea’s capabilities will become our reality,” he said.

Although it will be a new path for Korea, he said, many European countries are coalition governments and the system has proven effective. “For the National Assembly, a government that is not backed by more than 180 seats cannot pass any bill,” he said. “To reform politics and economy after the impeachment, we need new systems and creating laws will be the first step. But none of the candidates so far have the ability to secure that many seats.”

As of now, all five parties have fielded candidates for the May 9 presidential election. Moon is the nominee of the Democratic Party, the largest party in the legislature. Hong Joon-pyo is the candidate of the Liberty Korea Party and Ahn Cheol-soo is the nominee of the People’s Party. The Bareun Party nominated Yoo Seong-min and the Justice Party is represented by Sim Sang-jeung.

“I don’t have to say which factions should be members of the coalition,” Kim said, hinting at a possibility of forming an alliance with all candidates but Moon.

He said those who agree with “economic democracy, constitutional amendment and coalition government” must unite. About 300 people attended the launch event of his campaign, and Rep. Choi Myung-ghil, who left the Democratic Party to join him, hosted it. Other Democratic lawmakers considered allies of Kim also attended.