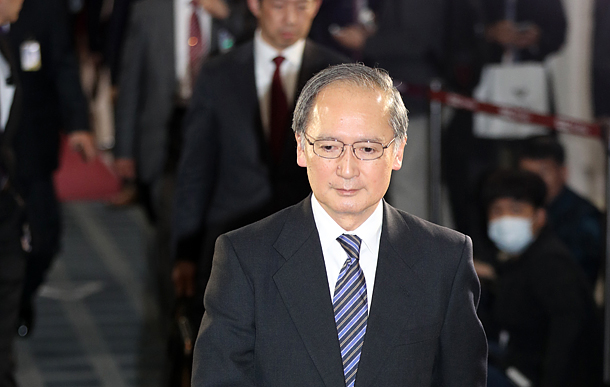 Japanese Ambassador to Korea Yasumasa Nagamine, upon returning to Seoul late Tuesday after 85 days, has indicated he plans to discuss with the Korean acting president the removal of a statue representing victims of sexual slavery.

Nagamine arrived at Gimpo International Airport at around 10 p.m. Tuesday and told reporters he plans to meet with Prime Minister Hwang Kyo-ahn, the acting president, and other key officials to “strongly request the implementation” of the 2015 bilateral agreement to resolve the so-called comfort women issue.

His return comes as key contenders in the upcoming presidential election in May, following the impeachment and dismissal of Park Geun-hye, have been calling to renegotiate or even scrap the deal to resolve the issue of Japan’s wartime sexual slavery.

Earlier Tuesday, before flying back to Seoul, Nagamine met with Japanese Prime Minister Shinzo Abe and paid a courtesy call to Chief Cabinet Secretary Yoshihide Suga, who both told the diplomat to persist on trying to have the statues removed.

Japanese media reported that Abe instructed Nagamine to demand that Korea faithfully implement the 2015 agreement with regard to the removal of the statue in Busan.

Nagamine was quoted by Japanese broadcaster NHK as having replied to Abe that he would do everything he could.

Yasuhiro Morimoto, the Japanese consul general in Busan who had also been recalled during the same period as Nagamine, returned to his post several hours earlier on the same day through Gimhae International Airport.

Nagamine and Morimoto left to Japan on Jan. 9, after Tokyo temporarily recalled them to protest against the installation of a bronze statue of a young girl representing comfort women victims near the back gate of the Japanese consulate in Busan, at the end of last year.

Japanese Foreign Minister Fumio Kishida announced on Monday that Nagamine and Morimoto will return to their posts, taking into consideration the need to collect information and prepare for the upcoming South Korean presidential elections scheduled for May 9, as well as Pyongyang’s provocations. Kishida also said Japan will continue to seek the removal of the statue and the implementation of the deal under the next administration.

There has been some criticism over the Japanese diplomat openly pressuring the acting head of the state. Nagamine’s counterpart as the Japanese ambassador would generally be a vice foreign minister and a meeting with Hwang would generally be arranged only on certain occasions, such as conveying a letter or important message from Prime Minister Abe.

A senior Korean government official told the JoongAng Ilbo Wednesday, “Whether or not the acting president meets with Ambassador Nagamine is our decision.”

The two countries’ foreign ministries struck a deal to resolve the so-called comfort women issue on Dec. 28, 2015, consisting of the Japanese prime minister’s apology and a 1 billion yen ($8.98 million) fund for the victims.

Under the deal, the Korean government “acknowledges” that Japan is concerned about a statue across from the Japanese Embassy in Seoul and said it will strive to “solve the issue in an appropriate manner.”

Tokyo has recently been concerned over the fate of the bilateral agreement, which has from its onset been protested by some of the victims, civic activists, lawmakers and presidential hopefuls who demanded that the Japanese government had to take on clearer legal responsibility.

Kyodo News on Tuesday quoted a Japanese Foreign Ministry source as saying that it is important to speak with Democratic Party’s Moon Jae-in, currently the strongest presidential contender, “to meet him quickly and communicate with him,” adding some had called for the ambassador to return even earlier.

Moon told reporters on Tuesday that should Nagamine request a meeting with him, “I would explain to him that the statue issue is not something that Japan should overly meddle and intervene in.”

He added he was to ready to meet with the Japanese envoy “for the two countries to advance in a heathy manner,” adding he would “fully point out the flaws in the Korea-Japan comfort women deal.”

Other presidential contenders, including Ahn Cheol-soo of the minor liberal People’s Party and Yoo Seong-min of the splinter conservative Bareun Party, have also called for the need to renegotiate the agreement.