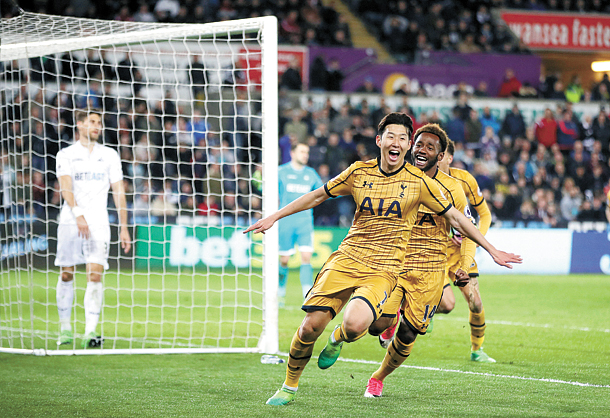 Son Heung-min of Tottenham Hotspur scored his ninth league goal to help the team win against Swansea City 3-1 at Liberty Stadium in Wales on Wednesday.

Spurs got off to a slow start in the beginning as they were losing 1-0 to Swansea City until the 88th minute. But in the last few minutes left in the game, Spurs performed stronger than ever, scoring three goals. Given seven extra minutes in the game, Delle Alli scored a first goal to tie the game and shortly after, Son scored another goal, to take the lead for the first time.

Son’s goal was crucial to the team because a loss to Swansea City would have put Spurs 10 points behind Chelsea FC, leader in the EPL standing. To finish off the game, Christian Eriksen scored Tottenham’s third goal.

“It was a very tough night and a tough, tough game,” Mauricio Pochettino, manager of Tottenham, said during a postgame interview, quoted on the Spurs website. “We were finding different solutions, different possibilities to play and changing positions. At the end, that moment, we felt free and exploded! We needed that emotion. It was a big win for us.”

The goal means more than the win against Swansea city for Son. Son’s ninth single season league goal was good enough to be the new single season record for an Asian player in the EPL, exceeding Ki Sung-yueng, center midfielder for Swansea City, who set a single season record of eight goals in 2014-15. Including his goals in the FA Cup and UEFA Champions League this season, Son has recorded 16 goals.

By winning its fifth consecutive match, the team maintains its second spot in the standing, improving the record to 19 wins, eight ties and three losses with 65 points.

On the other side, Ki, who was out for a month due to a knee injury, was subbed in to the game in the 72nd minute but was not able to prevent the team’s loss. With the loss, Swansea City drops to 18th in the standing, recording eight wins, four ties, 19 losses and 28 points. The bottom three teams in the EPL, 18th to 20th, will get relegated to the English Football League Championship.

Spurs will play their next match against Watford FC at White Hart Lane in London on Saturday.