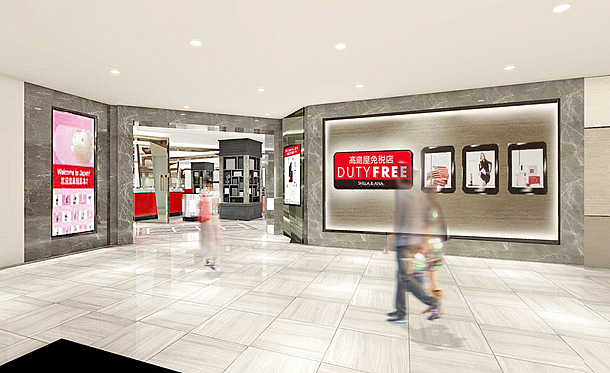 A computer-generated image of the A&S Takashiyama duty-free store opening on April 27 in Tokyo. Hotel Shilla has a 20 percent stake in the store. [HOTEL SHILLA]

Shilla Duty Free has won a license to operate a store inside Hong Kong International Airport.

Hotel Shilla, the parent company of Shilla Duty Free, on Wednesday secured the right to sell cosmetics, perfume and fashion accessories inside the Hong Kong airport until September 2024. The scheduled opening date is the end of this year.

Located on the island of Chek Lap Kok, Hong Kong International Airport is one of the biggest and busiest in the world, visited by 70.5 million people last year and over 1,100 flights per day.

This new license makes Shilla Duty Free the first among its domestic peers to operate stores inside three of Asia’s busiest international transportation hubs including Incheon International Airport and Singapore Changi Airport, where the company stepped foot in 2013.

“Sales may go up even higher considering there are overseas branches that just opened in the winter and one preparing for launch this month,” the company said.

Another store in the bustling commercial district of Shinjuku in Tokyo is set to open this month on the 27th. The store, A&S Takashimaya Duty Free, is a joint venture between Hotel Shilla, Japanese department store company Takashima and airline All Nippon Airways. Hotel Shilla has a 20 percent stake.

The duty-free store will occupy a 2,800-square-meter (30,000-square-foot) space on the 11th floor of the Takashimaya Times Square department store and be the first duty-free shop in Shinjuku.

The retailer has a Shilla Duty Free location in Phuket City, Thailand, which the company opened in November as a joint venture with two other Thai companies.