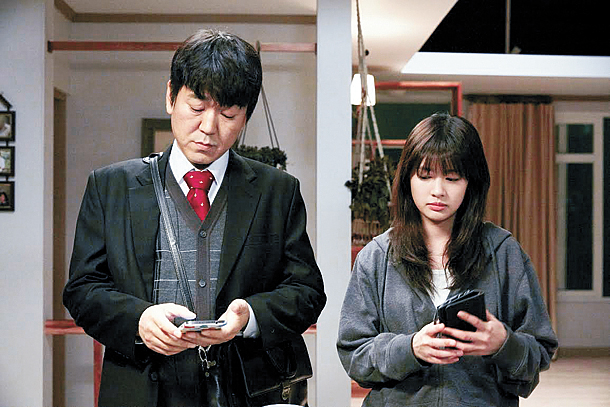 Daddy You, Daughter Me” is an upcoming family drama that sees a father and daughter repair their relationship after switching lives. [MEGABOX PLUSM]

A family comedy revolving around the recovery of a relationship between a father and daughter will hit theaters next week.

Directed by rookie filmmaker Kim Hyeong-hyeop, and starring actors Yoon Je-moon and Jung So-min as father and daughter, the upcoming “Daddy You, Daughter Me,” is an adaptation of the Japanese novel “Papa to Musume no Nanokakan” (which translates into Seven Days of a Daddy and a Daughter), written by Takahisa Igarashi. The novel was also made into a Japanese television series in 2007.

Revolving around a father named Sang-tae, who also is an office worker struggling to be promoted, and his daughter Do-yeon, who abhors her dad for his endless nagging, the story unfolds as their bodies switch. As they live each other’s lives, they come to understand the struggles that the other is going through in their daily lives, leading to the recovery of their fallen relationship.

Like most body swap films, “Daddy You, Daughter Me” finds its humor in the characters’ unusual behavior in their new bodies.

Sang-tae beaming at the sight of pretty nail designs on his fingers and the delicate Do-yeon walking with a stiff, duck-like gait are a few of the scenes that will cause audiences to roar with laughter.

But these scenes were not easy for the filmmaker.

“I realized that comedy is a very difficult genre [to direct with this film],” said the filmmaker during a press preview held at COEX in southern Seoul on Wednesday.

“I concentrated the most on communicating with the audience… Since it is a family movie, I tried my best to broaden the audience group [by reflecting the tastes of diverse age groups].”

Though body swaps have been a common trope in many movies for a long time, as evidenced by “Wonderful Nightmare” (2015), “The Hot Chick” (2003) and “Freaky Friday” (2004), the script of “Daddy You, Daughter Me” still seemed very interesting and attractive to the director when he first read it.

“Though body swap movies have their disadvantages, it also has its own advantages, and I decided to direct the movie [upon request] because I liked the script very much,” the director said.

“At first, I focused on the characters’ looks. However, after discussing with the actors, I realized that it would be more important to shed light on the inner hearts of the father and daughter.”

Focusing on the character’s heart is what made it possible for Jung to pull off playing a middle-aged father without much awkwardness or exaggeration.

“At first, I copied the body gestures, behavior and sounds made by middle-aged men,” Jung said. “But I faced limits [when I only] concentrated on looks… Since I did not want to simply pretend to look like a middle-aged man, I tried to understand the weight in a middle-aged man’s life as a father ignored by his own daughter and an office worker never being able to get promotion.”

Jung added, “Since I have never experienced living as a middle-aged person, playing one was very difficult. But instead of thinking about it too much, I approached the role as if [simply] playing a children’s game.”

The film, which also co-stars actors Lee Il-hwa, Shin Goo and Park Hyuk-kwon, comes to theaters nationwide on Wednesday, and runs for 115 minutes. It is rated 12 and over.