Seoul says pollution fight is out of its hands

Seoul says pollution fight is out of its hands 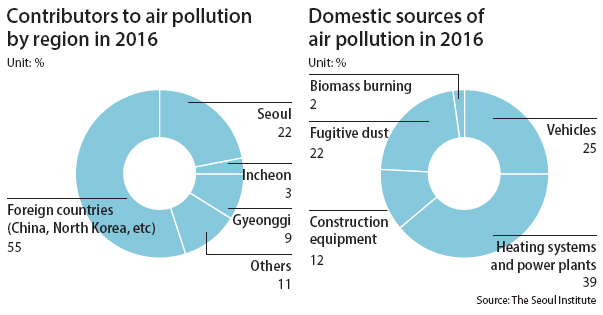 Seoul’s government is trying its best to counter the gunk in the city’s air.

But it admitted Thursday that sources of pollution from outside Korea, including fine particle pollution from China, have increased in the past few years.

“According to our research conducted in 2011 and 2016, Seoul’s contribution to pollution grew from 21 percent in 2011 to 22 percent in 2016,” said Hwang Bo-yeon, head of the Climate and Environment Headquarters of the Seoul Metropolitan Government. “But the contribution to air pollution by international factors, including fine dust from China, grew from 49 percent to 55 percent in the same period.

“The city will do all it can, including increasing city-to-city meetings with Beijing to address the problem together.”

The city governments of Seoul and Beijing formed a committee to address environmental concerns in 2014. Since then, the committee hosted international conferences on air quality, including one in 2014 when Beijing announced its goal to reduce fine dust particles in the air less than 2.5 micro-millimeters in diameter, or PM-2.5, by 20 percent by 2017.

But whether this goal was met by Beijing may not be confirmed in a forum to be held in June.

“It’s a sensitive issue, trying to confirm whether Beijing has met the goal,” said Lee Woo-jong, who works in the international cooperation on climate and environment department of the Seoul city government. “I’m not sure if Seoul had pledged a goal in reducing fine particle dust.”

According to the city government, the yearly average concentration of PM-2.5 pollution increased from 23 micrograms per cubic meter of air in 2015 to 26 in 2016.

Apart from international factors contributing to the pollution, local factors such as heating systems and power plants and so-called fugitive dust are also worsening the air pollution in the city, the Seoul city government said.

In Seoul, fugitive dust is largely caused by the wearing of tires on roads, concrete manufacturing and operations at construction sites.

“Comparing the research in 2011 and 2016, the contribution to air pollution by vehicles actually dropped from 35 percent to 25 percent, while that of heating systems increased from 27 percent to 39 percent, and that of fugitive dust increased from 12 percent to 22 percent,” Hwang said.

Other contributors include a greater number of thermoelectric power plants in the southwest section of the city and an increase in the number of diesel-powered cars registered with local governments in and around Seoul from some 340,000 in July 2016 to 410,000 in January.

To curb air pollution, the city government promised to block older vehicles that don’t meet emission standards from entering the city; increase the number of street sweepers; do research into why there are more fine dust particles in the air at least once every two years, instead of every five years; and speak with the central government about reducing the number of coal-fueled power plants.

“Vehicles unable to meet emission standards were barred from entering the city from Incheon from January,” Hwang said.

It said it will dispatch 30 new street sweepers this year to make a total of 75 sweepers fighting fugitive dust on the roads.

Particles less than 2.5 micro-millimeter in diameter - about thirty times smaller than the width of a human hair - can travel through the respiratory tract and reach the bloodstream.