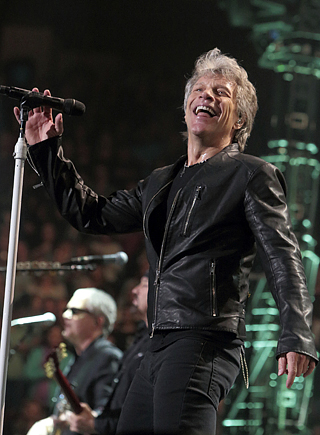 Ailing rock star Jon Bon Jovi has some bad medicine for his fans in New York City: They’ll have to wait another week to see his band at Madison Square Garden.

The New Jersey-born rocker decided Thursday night to postpone this weekend’s concerts as he continues to recover from bronchitis.

“The decision was difficult to make, but made in the interest of delivering the full, powerhouse performance for which Bon Jovi is known,” the band said in a statement, adding Bon Jovi’s doctor recommended that he not perform this weekend.

Bon Jovi has been battling the ailment for more than a week. He was forced to cut short a concert in Pittsburgh by nearly an hour on Wednesday.

Fans and some critics have noted that Bon Jovi had difficulty singing and hitting some high notes in the past week or so. During the Pittsburgh show, he told the crowd he had a sore throat and jokingly asked if anyone from a bar band knew all the words to Bon Jovi songs and could fill in for him.

The band is best known for hits including “You Give Love A Bad Name,” “Livin’ On A Prayer” and “Wanted Dead Or Alive.” It is promoting its latest album, “This House Is Not For Sale,” nearing the end of the first leg of what is expected to be an extensive tour. AP