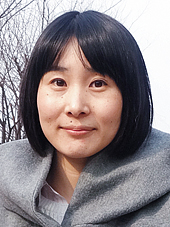 Aya Narikawa, 35, formerly a Japanese journalist for Asahi Shimbun, a Japanese newspaper, quit her job and entered Dongguk University’s Graduate School of Film and Video Production because of her love and passion for Korean films.

“Korean films have been my destiny since I was a high school girl who was deeply impressed ‘Seopyonje’ and ‘Joint Security Area,” she said. The decisive moment for her was when she saw the movie “The Way Home” with a friend in 2002 during a language course in Korea.

“I still cannot forget the day that I was watching ‘The Way Home’,” she said. “When I saw that a low budget movie without any famous stars was loved by the audience, I liked not only Korean movies but also Korean movie culture. I thought, ‘Korean people really like films.’”

After returning to Japan, she became a Korean-Japanese translation major at Osaka University and joined the Asahi Shimbun in 2008.

Narikawa’s desire to learn about Korean film began in 2010, when she heard director Shin Su-won say, “People eventually do what they want to do, and I quite working as a teacher to make movies.”

“I decided to study Korean films to have a happy life,” Narikawa said.

Narikawa’s most anticipated Korean film this year is “Taxi Driver.” She said she is looking forward to how the movie will describe the Gwangju Democratization Movement in the eyes of a foreign reporter, as well as her favorite actor Song Kang-ho’s acting.

She added, “After finishing school, I would like to work on a film exchange project between Korea and Japan, and I plan to participate in a Korean-Japanese research project.”