Trump calls Hwang to brief him on Xi summit

Trump calls Hwang to brief him on Xi summit 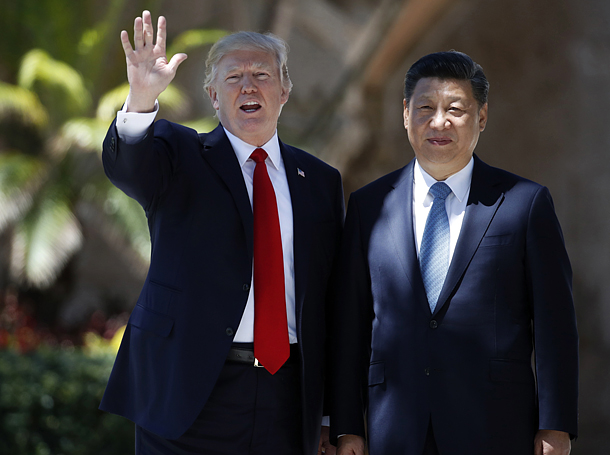 Trump and Hwang held a 20-minute phone conversation starting at 7:20 a.m. on Saturday in Seoul, after the U.S. president wrapped up a two-day summit with Chinese President Xi on Friday.

A South Korean government official said Sunday that Trump told Hwang that he “spoke in a clear manner so that the Chinese leader could understand the issue of the deployment of the Thaad system.” The official continued, “President Trump emphasized what it expects from China in regard to the North Korea nuclear issue.”

The U.S. president called Hwang from his Mar-a-Lago estate in Palm Beach, Florida, where the meeting was held before heading back to the White House.

Trump said he emphasized to Xi that “the Korea-U.S. alliance is important to both himself and the United States,” according to Hwang’s office on Saturday. They also discussed how to respond to North Korea’s nuclear and missile threats, while Trump said he “conveyed the United States’ position on the issue of the deployment of Thaad.”

China has vehemently objected to the deployment of a Thaad battery in Korea, saying it goes against its national security interests, undertaking a series of economic retaliatory measures against Seoul. Washington and Seoul have emphasized that the Thaad system is a necessary defensive measure to counter North Korea’s missile threat.

Ahead of the summit, a bipartisan group of U.S. senators sent a letter to Trump asking him to tell China to end its “unwarranted and unfair economic retaliation against South Korea” for the deployment of the Thaad system.

Despite his hardline rhetoric against Beijing during the presidential campaign, Trump described his relationship with Xi as “outstanding” right after the meeting, saying “tremendous progress” had been made in Washington’s relationship with Beijing. The two sides also agreed to a “100-day plan” aimed at reducing the U.S. trade deficit with China.

But the two leaders did not hold a press conference.

Xi and Trump also did not appear to have come up with any solid agreement on the Pyongyang issue over their 24-hour meeting, though U.S. Secretary of State Rex Tillerson said the two leaders “noted the urgency of the threat of North Korea’s weapons program, reaffirmed their commitment to a denuclearized Korean Peninsula, and committed to fully implement UN Security Council resolutions.”

In a briefing on the outcome of the summit, Tillerson added that while the two leaders focused on both countries’ commitments to denuclearize the Korean Peninsula, there “was no kind of a package arrangement discussed to resolve this.”

Xi was said to have shared that North Korea has “reached a very serious stage” in the advancement of its nuclear capabilities, Tillerson said.

“North Korea’s posture has to change before there’s any basis for dialogue or discussions,” Tillerson said.

The top U.S. envoy also said that Trump is willing to listen to and cooperate with China about North Korea, but that he also understands “it creates unique problems for them and challenges.”

Tillerson said that Trump told Xi, “We would be, and are, prepared to chart our own course if this is something China is just unable to coordinate with us.”

The talks were overshadowed by Trump’s decision to launch U.S. missile strikes on a Syrian air base in retaliation for President Bashar al-Assad’s deadly chemical weapons attack on civilians.

The U.S. Navy’s firing of Tomahawk cruise missiles into Syria, which came during Xi and Trump’s dinner, was seen by some observers as a powerful message to Pyongyang, and its main backer Beijing, adding weight to Trump’s assertion that he could act unilaterally against North Korea, with or without China’s support.

Tillerson described the strikes as “deliberately considered” by the president and a “response that we believe is both proportional and appropriate.”

“Looking over Trump’s remarks, he was able to say everything he wanted to and conveyed his thoughts clearly, without causing misunderstanding, to President Xi,” Chun Yung-woo, a former presidential national security adviser and head of the Korean Peninsula Future Forum, told the JoongAng Ilbo on Sunday. “President Trump personally requested China to retract its retaliation over the deployment of the Thaad system, which signifies he will wait for China’s response to this.”

The Trump administration has emphasized that Washington could place additional unilateral sanctions on North Korea, as well as measures against Chinese banks and companies engaged in illegal transactions with North Korea.

One government official in Seoul pointed out, “The United States has evidence on how North Korea used some Chinese banks and evaded sanctions to gain profit.”

The Trump administration is reviewing secondary sanctions on Chinese financial institutes and companies that are involved in illegal business with North Korea.

Secretary of Commerce Wilbur Ross in the press conference with Tillerson referred to the U.S. Commerce Department’s $1.17 billion fine on Chinese telecom company ZTE last month for the illegal shipment of equipment to Iran and North Korea in violation of U.S. sanctions. “So they recognize that that shows our clear determination to crack down on that sort of activity,” Ross said.

“If China shows an uncooperative attitude toward the North Korea nuclear issue,” a government source in Seoul said, “Trump has made clear that he intends to actively implement secondary sanctions and is reviewing administrative procedures.”

The South Korean Ministry of Foreign Affairs in a statement Sunday lauded the overall success of the U.S.-China summit based on announced results. “It is significant that comprehensive and inclusive discussions took place putting considerable weight on the agenda on our key interests, the North Korea nuclear issue and the Korea-U.S. alliance issues.”