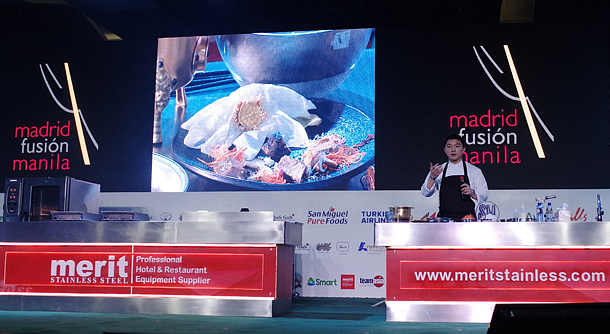 MANILA, The Philippines - It has not been easy to define Philippine cuisine. The country itself was colonized by Spain for centuries, and then by the United States, followed by the Japanese. This unique history led to a mixture of diverse cultures, which can be seen in the food culture of the Philippines. Coupled with acting as the crossroads of cultural exchange between Asia, the Americas and Europe, it has been difficult for even Filipinos themselves to understand what exactly their cuisine is.

The national dish of the Philippines, known as lechon (roast pig), originated from Spain. Sinigang, or Filipino sour soup is said to have originated from the Malaysian dish known as singgang. The Filipino lumpia (egg rolls) and pancit (fried noodles) are heavily influenced by Chinese cuisine.

“We Filipinos have been saying, ‘Why is it that Filipino food never gets out there? Thai cuisine is so well known all over the world, so is Japanese, Korean, and of course Chinese. But what happened to us?,’” said Margarita Fores, a Filipino chef who was awarded Asia’s best female chef in 2016. “I think it’s largely because of our colonial mentality… So when people ask what Filipino cuisine is, it was really hard to put it in a box.”

According to Fores, it was only recently that the Filipinos realized that “precisely the fact that we are a mixture of all these cultures is what makes us unique.”

“So the minute we stopped questioning ourselves, everyone became united and decided that it was time to push the cuisine forward.”

The Philippines has indeed been pushing forward with introducing its cuisine through the Madrid Fusion Manila (MFM), which three years ago became the Asian spinoff of Madrid Fusion, one of the largest international gastronomy conventions.

This year’s MFM kicked off on April 6 at the SMX Convention Center in Manila. Just like Madrid Fusion held annually in the Spanish capital, the three-day event featured presentations by some of the world’s best chefs, cooking demonstrations, food tastings and trade exhibitions.

According to Fores, who helped Madrid Fusion to come to Manila, it was in fact Korea that inspired her to talk to the government, which ended up becoming the first Asian country to host the Spanish gastronomy congress outside of Spain.

“When I went to Madrid Fusion about eight years ago when Korea was the featured country, I was amazed at how your government was so engaged in bringing your cuisine forward,” she said. “During the event, Koreans came up with this kimchi truck with pictures of kimchi plastered all over it and drove all around Madrid. They also installed this big tasting counter for kimchi in the center of the venue, showcasing about 20 different varieties of kimchi in your traditional jars. They prepared this little giveaway [prize] for the participating delegates but [did not hand it over] unless they had tried all 20 varieties of kimchi.”

After witnessing how “effectively the Korean government and the private sector collaborate together to promote Korean food to the world,” Fores went straight to see then-Secretary of Tourism Ramon Jimenez, and suggested that the Philippines should be featured at Madrid Fusion. But Jimenez went a step further and brought the event to Manila.

Under the theme “Towards a Sustainable Gastronomic Planet,” MFM 2017 invited more than 20 chefs from across the globe including Jordi Roca and Alejandra Rivas Gomez of El Celler De Can Roca, Rodrigo De La Calle of El Invernadero and Kiko Moya of L’Escaleta from Spain; Julien Royer of Odette from Singapore; Gert de Mangeleer of Hertog Jan from Belgium; Josh Boutwood of The Test Kitchen and Jordy Navarra of Toyo Eatery from the Philippines; and Tony Yoo of Dooreyoo from Korea.

On Saturday morning, when Filipino chef Navarra of Toyo Eatery appeared on stage for his presentation, he brought along a native fisherman from Diura Fishing Village in Batanes, whom he called his friend. Instead of taking this as an opportunity to show off what he can do inside a kitchen, Navarra moved aside and allowed his fisherman friend to show off how he cuts and prepares durado, a kind of flying fish that Navarra uses for his kinilaw (a raw seafood dish similar to ceviche).

Using ingredients caught and cleaned by his friend, Navarra made kinilaw on the spot saying that this is “our contribution to this artisan’s work.”

For Navarra, sustainability means looking inwards and using local ingredients from local farmers and fishermen who use their own traditional techniques and methods.

With the belief that he has to cook dishes that can reflect who he and his crew are, Navarra opened Toyo Eatery and created a menu that uses locally cultivated ingredients that he and his team continue to discover as they take trips together, visiting all the rural areas across the Philippines.

One dish that highlights what they are into is a garden salad that was inspired by “Bahay Kuho,” a nursery rhyme Filipinos sing while growing up. The song introduces 18 vegetables that can easily be found in a Filipino garden. Inspired by the song, Navarra put all of the vegetables together to make a salad.

“It has everything we want to do with the food. It’s relatable, it’s cultural and the ingredients are very local,” said Navarra. “Because of the local ingredients, you can feel the local flavor profile. This dish in fact became the foundation of the food philosophy we have today.”

“Many of us in the Philippines are still trying to understand all the parts of Filipino food because there’s been so much global influence to it. This influence was very normal for us,” he said. “That’s why we focus on ingredients and flavor profile rather than dishes and recipes.”

Many of the internationally acclaimed chefs at the event identified with getting involved in this kind of anthropological cuisine, working closely with local farmers and fishermen.

Ray Adriansyah and Eelke Plasmeijer of Locavore Ubud in Bali, Indonesia, also emphasized the importance of “going local,” saying that 90 percent of the ingredients they use in their kitchen are sourced from Ubud.

“We strive to be close to the local farmers,” said Adriansyah. “They are the ones who teach us,” Plasmeijer added.

Introducing Filipino cuisine to the world was not the only objective of this year’s MFM. The Department of Agriculture of the Philippines, which co-organized the MFM with the Department of Tourism, hosted the event’s daily lunches under three different themes - Rice, Nose-to-tail, and Corn - to represent each day of the event, allowing participating delegates to experience Filipino dishes made with local ingredients during their lunch hour.

At the Regional Luncheon on Thursday, visitors were able to learn about the rich diversity of Filipino rice, and taste some too.

Participating Filipino chefs prepared an array of dishes using different types of heirloom rice, referring to the varieties of rice in the Philippines that have been passed on from generation to generation.

According to Undersecretary Burna Romulo-Puyat of the Department of Agriculture, rice was the first ingredient they picked, as Filipinos are heavy rice eaters.

“Every Filipino, from all walks of life eats rice,” said Romulo-Puyat. “We eat rice for breakfast, for lunch, for dinner - even our desserts have rice in them.”

Despite having such rich varieties of heirloom rice - more than 300 different kinds - Romulo-Puyat said that not so many Filipino chefs use the different kinds “because they’ve never experienced it.”

“So what we did with the chefs [is give] them different kinds of heirloom rice and told them to make something [with] it. In that way, we are not only providing sources for the chefs to experiment, but also helping farmers to increase their production,” she said. “Our worry has always been with the farmers, that they might one day abandon farming that’s been handed down generations because it doesn’t make enough money.”

After seeing a positive response from international visitors tasting their new dishes, the chefs began asking Romulo-Puyat if they could also join the trips she goes on to rural areas to find ingredients.

“Usually, it is only Magarita Fores who joins me on those trips but now, the chefs here have been telling me that they want to go and travel to all those rural areas to find more ingredients,” she added.

According to Romulo-Puyat, chef Nicco Santos of Hey Handsome in Manila mentioned that he was charmed by violet rice and said that he may use it for one of his dishes.

Next generation of Korean food

“Do you know Korean barbecue?” said Yoo to hundreds of international guests attending his presentation on Friday morning, while showing them a video clip of beef being grilled on a charcoal fire, much to their excitement of the crowd.

But the style of Korean barbecue known as seolyamyeokjeok that Yoo introduced, was not what many had in mind.

“According to our old cookbook, Koreans grilled beef by using snow,” said Yoo. “They first grilled the meat using charcoal fire, then tossed it into the snow field. Then they took it out of the snow to grill on fire again, then tossing it back into the snow. This process was repeated four to five times to make the meat tender. That’s why this is a special dish, that requires people to wait for the snow.”

The technique was developed at the time as cows were used for farming, which made the meat very tough. Therefore, it was necessary to make the beef as tender as possible.

For the demonstration of his dish, instead of using snow, Yoo used liquid nitrogen for a similar effect. He later garnished the plate using different types of mushrooms, Korean ginseng and a lotus flower.

“I travel a lot but I’ve never seen this technique anywhere else,” he said.

There are many dishes known outside of Korea, such as kimchi and bibimbap. But Yoo said that he believes it is now time to introduce Korean cuisine using a different frame - even if that means having to travel to introduce seolyamyeokjeok in English.

“So far, we’ve done a great job introducing specific Korean cuisine, but it was always like, ‘Do you know kimchi?’ or ‘Do you know bibimbap?’ regardless of who it is,” Yoo told the Korea JoongAng Daily after his presentation. “But now, it’s time to take a different approach and focus on the wide spectrum of Korean dishes and the deeply rooted history behind them, catering to who the audience is.”