Korean architecture prepares for its time to shine : Upcoming convention in Seoul will focus on future of cities, design

Korean architecture prepares for its time to shine : Upcoming convention in Seoul will focus on future of cities, design 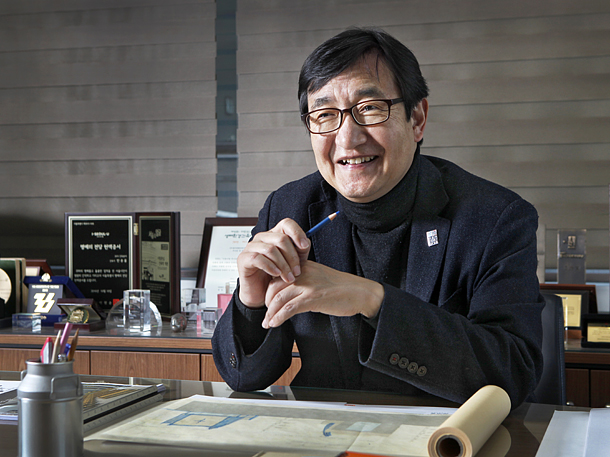 Korea went through such rapid, construction-centered development over the course of several decades that for many Koreans during that time, architecture meant nothing more than erecting new buildings, one after another. In recent years, construction has turned into one of the major means to accumulate wealth, viewing architecture as a mere function of real estate development. But when many foreigners visit Korea, especially its capital Seoul, they are charmed by the aesthetics of Korean architecture, where old and new coexist beautifully, with an abundance of well-preserved traditional buildings against the backdrop of modern high-rises. 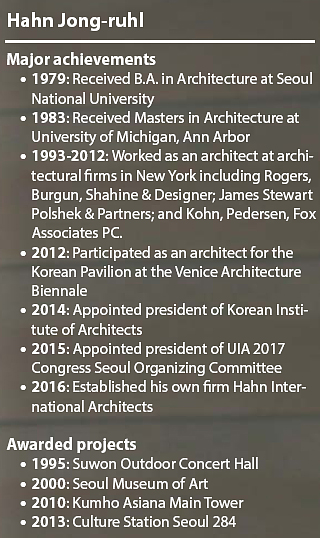 It’s about time, says Korean architect Hahn Jong-ruhl, who is also the president of the UIA (Union of International Architects) 2017 Congress Seoul Organizing Committee, “for us to really take time to understand what architecture is and how it influences our lives, especially in an era of such urbanization.”

It is in fact the right time as Seoul is the host city of the UIA World Architects Congress this year. This triennial event brings thousands of people in the field of architecture from around the globe together to exchange ideas, discuss issues and share their vision for the future while working to raise awareness of architecture as a whole, by organizing programs for the public to enjoy.

“This congress was launched in 1948 and is the only association in the field of architecture recognized by the United Nations. It represents more than a million architects in 124 member countries so it’s like the Olympic Games or the World Cup for architects,” said Hahn. “By hosting such an important event in Seoul, we hope to pave the way for Korean architecture and architects to go into the world. We also hope to peak the interest of everyday people who are curious to learn what architecture is, how Korean architecture developed and the culture and aesthetics of architecture, which has been somewhat neglected in Korea.” 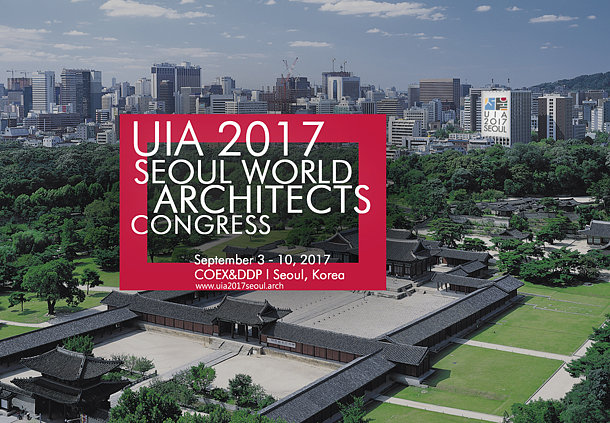 The UIA 2017 Seoul World Architects Congress, under the theme “Soul of City,” kicks off on Sept. 3 at the COEX Convention Center in southern Seoul. The UIA Assembly will occur after the congress’s closing ceremony on Sept. 7 at the Dongdaemun Design Plaza in central Seoul.

It is a world congress for architects, but Hahn says “it’s not about boasting what kind of extravagant buildings the host country has, but sharing how the host country’s architecture developed, sharing our achievements and mistakes.”

“For the upcoming congress in Seoul, we hope to highlight the theme ‘Soul of City’ by touching on issues such as urbanization, and the roles of architects in such an era,” Hahn said.

To learn more about the UIA Congress in Seoul as well as the Korean architecture community, the Korea JoongAng Daily recently sat down with Hahn for an interview at his architectural firm in Samseong-dong, southern Seoul. The following are edited excerpts from the interview.

Q. How did Korea become the host country for the UIA 2017?

A. We actually were chosen as the host country on our third try. The first try was back in 1993 and then there was another in 2002. In that time, China and Japan hosted the congress in Asia. So we really prepared for this one thinking it’s our last. It’s like bidding for the Olympic Games. You surely have to talk about how great your stadiums and infrastructures are but ultimately, the country itself has to be appealing to the judges. So we talked a lot about our history, the tradition as well as our strength in information technology. Fortunately, since our second failure in 2002, Korea really began to increase its global presence and many people began to show interest in Korea. Korea for them became an attractive country they have not yet explored.

The Congress is a triennial event. Does the hosting country come up with a theme each time?

Yes. Each country that places a bid has to present a theme. We came up with “Soul of City,” because first of all, the pronunciation of the word “soul” is similar to our city “Seoul.” Moreover, we wanted to emphasize the importance of incorporating soul into the architecture and cities we live in. Most cities around the globe are currently faced with various problems due to rapid urbanization. Research shows that about 70 percent of the world’s population will live in urban areas by 2050. This is one of the biggest issues that has been discussed within the architecture community. With that in mind, we came up with three sub themes - future, culture and nature - and each sub-theme will be brought forward for in-depth and open discussions. 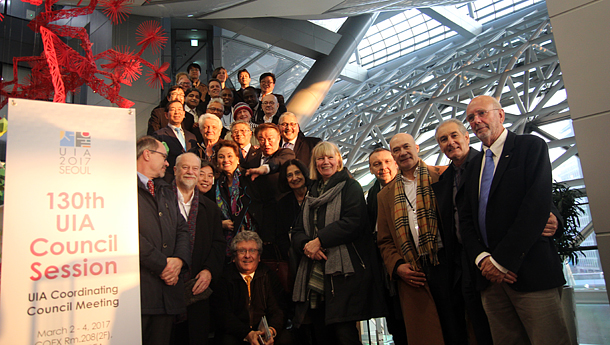 Compared to the level of Korea’s economic development, the field of architecture and design lag behind. There are many reasons but I think the biggest would be failing to recognize architecture as part of the arts and culture. The aesthetic side of architecture has been somewhat neglected for so many years. That is, of course, because Korea went through a construction-centered development and all we cared about was quickly developing and erecting buildings. So the cultural aspects of architecture as well as architectural design were not important to decision makers. However, there are many aspects of Korean architecture that deserve international recognition. Through 5,000 years of history, Korea has accumulated diverse ways of building houses, how we interpret each area differently and so on. Pursuing rapid development for the past 60 years resulted in both merits and demerits, but consequentially, we do now have a fairly good environment to live in. We may be a little behind other developed countries, but Korea, especially Seoul has a unique energy that even Europeans are envious of. Seoul has one of the world’s best public transportation systems, it’s safe to walk around at night and it’s such a vibrant city. So, this is what we are going to share with the international delegates who visit Seoul for this year’s Congress. We will talk about the side effects we’ve experienced while going through such a development and if possible, let them learn from our mistakes and adopt it in their own cities. Basically, we are going to open various issues for discussion.

Many people who have visited Seoul are impressed by the coexistence of old and new, the traditional Korean buildings and the high-rises that stand behind them. Do you see this as one of the charms of Seoul?

Certainly. I visited so many different countries, from Ecuador and Peru to Switzerland, to promote Korea for the upcoming event. But there’s no city like Seoul. The city itself has a 600-year history. It’s a very historical city but at the same time, it’s very metropolitan, filled with sophisticated and modern buildings here and there. I think a snapshot that best describes what Seoul looks like would be a picture of Deoksu Palace, surrounded by high rises and mountains in the background. It’s not only old and new that coexists in Seoul, but there’s also abundant nature here. For example, it’s just a few subway stations away for Seoulites to reach a mountain for a decent hike. We talked about these aspects a lot when we were promoting Korea.

Moreover, another aspect that draws people’s interest in Korea is that we are the only divided country in the world. Of course it’s not something to be proud of, but we architects are very interested in the demilitarized zone that Korea has. This strip of land that’s been untouched for the past 60 years - stretching about 250 kilometers (155 miles) across the Korean peninsula with a width of 4 kilometers - is the type of land that stimulates every architect’s creativity. Thousands of animal species have made it their home and it excites architects to think about what to do with it when the two Koreas become unified. Seoul is indeed a very interesting city and Korea is a land of opportunity for architects around the world.

To make sure this congress doesn’t end up as an event only for architects, I heard that the organizing committee is working hard to include programs for the general public as well. What has been planned so far?

We have an honorary committee made up of members from diverse fields. From the field of art and culture, we have Hong Ra-hee, the former director of Leeum, Samsung Museum of Art; from music, maestro Gum Nanse of the New World Philharmonic Orchestra kindly accepted to help us. From politics, Liberty Korea Party Representative Na Kyung-won is helping us while Chairman Kim Young-ho of Ilshin Spinning Co., is with us from the business sector.

Exhibitions on architecture and design will be organized at art museums and galleries across the city including the Seoul Museum of Art and the National Museum of Modern and Contemporary Art. We are also in the middle of discussions to hold a classical concert to celebrate the event.

There will be a number of programs for young students or aspiring architects during the congress. All the information and schedules are being updated on our website so those who are interested can come and check them out.

For foreign visitors, we’ve organized various tour programs as well such as short city tours that focus on architecture as well as traditional markets so that they can take a look at the city during the congress days. For those who are coming before the event or staying a little longer, we’ve also organized a tour to the DMZ led by the Art Sonje Center. We are also discussing a tour to the Asia Culture Center in Gwangju, as well as Songdo in Incheon. There will be about 20 to 30 different tour programs.

Since Korea is hosting the UIA Congress, what are the ways forward for Korean architecture?

One of the major objectives of hosting the UIA Congress in Seoul is to help people view architecture as it is and understand how architecture affects our lives. Architecture is like our outfit, it’s what we wear. It shows who we are, determines our characteristics, and we also have to feel comfortable in it. When I travel around the world, many of the famous buildings are designed by European and American architects, then recently, there are many Japanese architects. It’s time for Korean architects to make a name for themselves.

It’s also important for the authorities, like the president for example, to have a proper understanding of architecture and how it affects our lives. For example, there was the Grand Projects of Francois Mitterrand that allowed young French architects to work on important projects to revitalize the city.

One of them was Dominique Perrault, who designed the Bibliotheque national de France, or the National Library of France. Back then, he was only in his 30s, but the government gave him full support, and he’s now a world-renowned architect working on important projects across the globe including the new campus center for Ewha Womans University. He’ll also be coming to Seoul for the Congress.