Adidas CEO on his firm’s strategy in the shoe game

Adidas CEO on his firm’s strategy in the shoe game

German sportswear giant Adidas had a stellar year in 2016, posting a net income of 1.02 billion euros ($900 million), one of its highest in the company’s history.

Yet, Kasper Rorsted, the newly appointed CEO of Adidas, says the record high performance poses the biggest threat to the company.

“I think the biggest challenge is that we are a successful company,” the 55-year-old said in an interview with the Korea JoongAng Daily on Wednesday. It was his first visit to Korea since he joined Adidas.

“Bringing clarity to why it is important to change when you just had the most successful year is the biggest challenge for the company at the moment,” he added.

Rorsted took the helm of Adidas in October after joining the sportswear company as an executive board member in August.

Before that, Rorsted served as CEO of consumer goods company Henkel for eight years. He boosted the operating profit margin from 10 percent to 16 percent.

He is expected to do the same at Adidas, which despite is record sales last year, still has some work to do, especially in the United States.

Adidas lost its long-reigning No. 2 position in U.S., the world’s biggest sportswear market, in 2014 to rising star Under Armour. It reclaimed the spot last year and Rorsted hopes for continued growth. 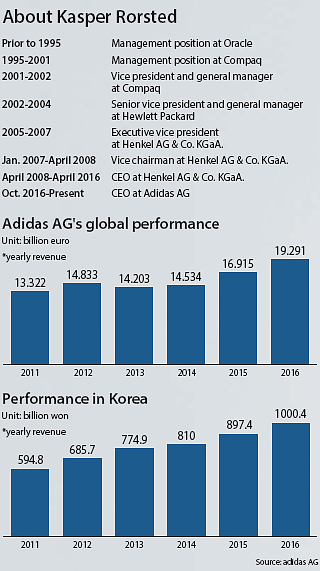 “We are very happy with the development in the U.S. but we are unhappy with where we are,” he says. Below are edited excerpts of the interview with Rorsted.

Q. You have a versatile portfolio, having worked at IT companies like Oracle and Compaq and then serving as CEO for Henkel, a consumer goods company. How are you incorporating your past experience into your new job?

A. I think it is important to understand that when you move as a CEO, you can’t apply the same medicine to different patients. One of the biggest differences is that Adidas is a high-growth company and Henkel is a low-growth company. Adidas is an unstructured company because we grow so quickly. Henkel was a very structured company, so here, I need to engage much more actively with local consumers. Things I can bring along from experience at Henkel are people management, raising consistency in how we do business, such as in finance and legal sectors.

You have been emphasizing female leadership. Why is that?

I think it is an industry where women are underrepresented, especially in leadership roles. I was the first CEO in this company who said female leadership was something important. I said in October that this is something that we have to change. I did so in my U.S. trip and have done so in the past two days in Japan. I will do the same when we have an employee meeting with Adidas Korea. I think the more you, as a CEO, continue to push the message and legitimize it, the more it will likely happen. I am not putting any quota to female and male leadership at the company. I don’t think that is right thing to do. It will take five to seven years for change to come. I am telling the leaders to find strong female leaders and pull them through the organization. If you are a minority, you are not part of the network so the leaders have to find one or two to pull them through.

The sportswear industry is an extremely competitive market. How do you plan to counter the rivals?

We are not in a tennis game. We need to understand that we could beat eight competitors and still lose in the market. So if you focus on only one competitor, doesn’t matter which one it is, you might beat that competitor but actually not win in the market. So when we look at it from the strategic standpoint, what we need to do is grow market share every year and improve profitability every year. We have to do both. It is important to gain market share and develop profitability than beating somebody for the sake of beating somebody.

Adidas put a lot of emphasis in penetrating the U.S. market last year. However, China is emerging as a strong player in the sports market as well. How differently are you approaching these two giants?

The starting position is very different. In China and also in Korea, Adidas is either a leading player or in a neck-and-neck position with the No. 1 player in the market. On the other hand, in America, we have executed very well in the last two and a half years but we are still in a catch-up mode. U.S. has the largest volume market in the world with 37 percent of the children’s sporting goods in the world. We’ve done a great job in the U.S. but we have 50 years of catch-up. We are still in an investment mode and we need to grow quicker in the U.S. than any other market. It is a very, very difficult position. We are building the position in the U.S whereas in Asia, we are expanding the position.

What significance does Korea have for Adidas?

Korea is one of the strongest markets in Asia that plays a key role for us. It achieved 10 percent growth in annual sales last year. Seoul is important not only in terms of size but in terms of trend-setting and use of digital technology. I am aware that Korea is a leader in that area.

What competitive advantage does Adidas have over other industry players?

Pursuing open source so we don’t create something within is one of our competitive edges. We have collaborated with Stella McCartney, Kanye West and more. We are trying to stay creative by bringing in innovation from other areas.

One example of that would be Yeezy, a collaborative shoe brand with West that was a huge success.

Yeezy is a brand but also it brings creative energy to the company. It brings products out that I don’t think we would have done. He is pushing borders that we probably wouldn’t have pushed. So we are extremely happy with the relationship.

You raised the sales goals of e-commerce transactions from the original 2 billion euros set for 2020 to 4 billion euros. Why is that?

It gives us a huge opportunity to build on a strategic connection with consumers. If you directly shop on our website, we will understand your behavior and it will allow us to innovate better products and bring them back to you. With the middleman, we actually don’t understand what you like and don’t like and how you shop and look at our products.

Adidas is the front-runner in realizing the so-called Industry 4.0 through what’s called the Speedfactory, where the manufacturing process is digitized and the products are customized. How will this new concept of shoe-manufacturing affect the consumer’s life?

You can print a shoe in two hours. In a normal setup for personalized shoes, it takes about 20 working days. But with this, you can go into a store in the morning, create your shoes, go into a Starbucks to get a cup of coffee and then pick up your shoes in the afternoon. We reduce the delivery time for the supply chain. In the traditional manufacturing line, it takes 18 months for a design to be made into a shoe that gets sold in the market.

So does it mean it will be more suitable for the fast-changing trends of the sportswear industry?

When the Speedfactory develops, will it eventually replace the traditional work force on the manufacturing line, which currently is located in the Asian region where labor is cheap?

If you look at the volume, Adidas is growing now. We are going to grow at an 11 to 13 percent rate this year. This is going to be complementary to what we are doing. We are a growth industry and will continue to be. The type of job may change over time, but the absolute amount of jobs will continue to increase. It is not one or the other. We foresee the best volume will continue to come out of Asia and hopefully sell more shoes and apparel every year.