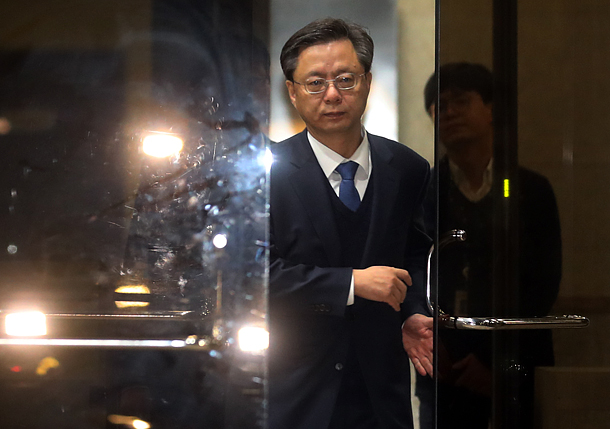 The prosecution faced fierce criticism on Wednesday for having failed to detain Woo Byung-woo, once a powerful member of the presidential team of Park Geun-hye.

Judge Kwon Soon-ho from the Seoul Central District Court ruled around 12:12 a.m. on Wednesday that the prosecution’s charges against Woo are disputable. He also said it is hard to see the necessity to detain Woo as the prosecution failed to prove there is a risk of evidence destruction or flight.

The prosecution wanted to take custody of Woo to investigate and prosecute him for abuse of power, professional negligence and obstruction of justice. One of the main charges was turning a blind eye to the clout Park gave her friend, Choi Soon-sil, in influencing state affairs.

The prosecution applied for the detention warrant on Sunday. The warrant hearing took place for seven hours on Tuesday and Judge Kwon made the ruling after midnight.

While key players of the presidential scandal, including Park and Samsung Electronics Vice Chairman Lee Jae-yong, were detained, Woo is the only person who managed to stay out of jail.

Rep. Kim Kyung-jin of the People’s Party said in an interview with CBS radio that the prosecution did not have a strong will to go after Woo. Kim said the prosecution left out a solid charge from its warrant application, a sign of its lukewarm attitude. Woo was investigated for interfering in the prosecution’s 2014 probe into the Coast Guard’s failed rescue operation during the Sewol ferry sinking, but the charge was not included in the warrant request.

Kim, who worked as a prosecutor until 2007, also said Woo still has strong ties to the insiders of the prosecution. “The Woo probe, in fact, is a probe into former and incumbent prosecutors,” he said. “It could have not gone too well.”

The presidential candidates also questioned the prosecution’s will to go after Woo.

While expressing regret that the court decided to reject the warrant request, the campaign of the Democratic Party’s candidate Moon Jae-in said Wednesday the prosecution chose to protect one of its former members with a weak investigation, in defiance of the people’s sense of justice. Moon’s aides also demanded strong prosecutorial reform.

Ahn Cheol-soo, presidential candidate of the People’s Party, also expressed his frustration. In a Facebook post, Ahn wrote, “Whether the prosecution made a poor attempt to seek the warrant or the court was unfair, the people’s expectation for justice was betrayed.”

He also said later that Prosecutor-general Kim Soo-nam must resign from the post over the situation, showing suspicion that the prosecution did not do its best to go after Woo.

Sim Sang-jeung of the Justice Party also questioned the prosecution about its will to hold Woo responsible. “The prosecution didn’t conduct proper raids,” she said. “They didn’t use proper charges. I don’t think the prosecution is incompetent. I wonder if they are acting this way deliberately.”

The special investigation team of the prosecution said Wednesday it will thoroughly study the court’s reasons for rejecting the warrant and check on the investigation process. “We will make a judgment on whether we will make another warrant request or not,” it said.