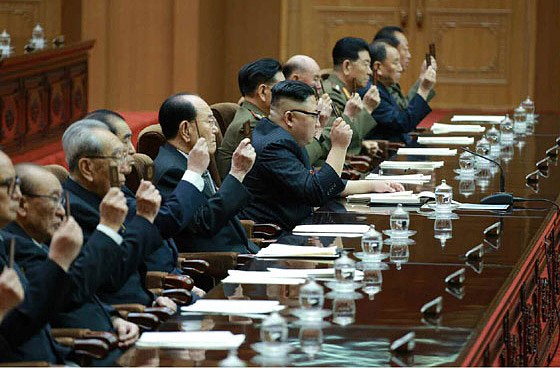 North Korean leader Kim Jong-un and senior officials hold up Workers’ Party membership books as a gesture of approval of a bill at a meeting of the Supreme People’s Assembly, North Korea’s parliament. The convention, held for the first time in nine months, took place at the Mansudae Assembly Hall in Pyongyang on Tuesday. [RODONG SINMUN]

North Korea decided to reestablish a parliamentary diplomatic commission Tuesday, in what appears to be a sign that leader Kim Jong-un is seeking to improve ties with other countries amid harsh sanctions against its missile and nuclear development program.

The state-run Korean Central News Agency (KCNA) reported that the revival of the commission was stamped in the latest meeting of the Supreme People’s Assembly, North Korea’s parliament. The convention, held for the first time in nearly nine months, took place at the Mansudae Assembly Hall in Pyongyang on Tuesday.

The North’s media did not explain precisely why the commission would be reinstated 19 years after former leader Kim Jong-il, Kim Jong-un’s father, demolished it.

Ri Su-yong, former foreign affairs minister, who currently serves as vice-chairman of the Central Committee in the ruling Workers’ Party of Korea, was elected chairman, according to the KCNA.

Other members in the commission include Ri Ryong-nam, vice-premier of the Cabinet; Ri Son-gwon, chairman of the Committee for the Peaceful Reunification of the Country of the DPRK; Kim Jong-suk, chairwoman of the Korean Committee for Cultural Relations with Foreign Countries; Kim Kye-gwan, first vice-minister of foreign affairs; Kim Tong-son, vice-chairman of the Central Committee of the General Federation of Trade Unions of Korea; and Jong Yong-won, secretary of the Central Committee of the Kimilsungist-Kimjongilist Youth League.

South Korea’s Ministry of Unification, which handles inter-Korea relations, said in a statement Wednesday that the North is likely to use the organ “to flee from international isolation” as world powers continue to impose harsh sanctions against the regime.

North Korea has a history delivering significant messages to the outer world through crucial political conventions, but did not do so Tuesday. The Unification Ministry analyzed the outcome of the meeting to have been “mundane” overall.

Jang Kil-ryong was appointed minister of the chemical industry.

Kim Won-hong, former minister of state security, whom South Korean intelligence authorities believe was purged earlier this year, was not caught on video footage released by the KCNA of the meeting. His successor was not mentioned.

Among other agenda items discussed in the 5th session of the 13th Supreme People’s Assembly included a review of last year’s state budget and the finalization of this year’s spending plans. The execution of the law on enforcing the universal 12-year compulsory education system was also negotiated, as well as North Korea’s five-year strategy for the development of the national economy.

Among many sectors the parliament vowed to boost, “solving the acute shortage of electricity and developing metal and chemical industries” was mentioned as a top priority.

Investment in the fields of science and technology would also be increased, according to the KCNA, in order to solve related problems in everyday life.