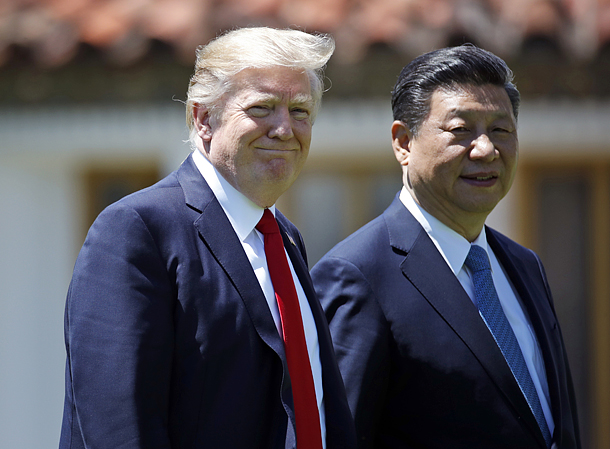 President Donald Trump and Chinese President Xi Jinping walk together after meetings at the Mar-a-Lago resort on April 7 in Palm Beach, Florida. Xi held a phone conversation with Trump Wednesday in which he said that conflict on the Korean Peninsula has to be resolved through “peaceful means.” [AP/YONHAP]

Chinese President Xi Jinping spoke on the phone with U.S. President Donald Trump Wednesday and emphasized that conflict on the Korean Peninsula has to be resolved through “peaceful means,” after Trump reiterated that he was ready to solve the North Korean nuclear issue on his own.

The Chinese leader also said that Beijing wants to have “communication and cooperation” with the United States on this matter.

This phone call came just days after the two leaders held their first summit at Trump’s Mar-a-Lago resort in Florida last Thursday and Friday, during which Xi invited the U.S. president to a state visit to Beijing within the year.

Trump called their summit a success and told Xi that he was looking forward to this visit.

The Chinese leader said he and Trump advanced “mutual understanding and established favorable conditions to accomplish tasks at hand,” adding that stage-by-stage, a 100-day plan to overhaul trade relations will be carried out.

The phone conversation between the Chinese and U.S. leaders came at a time of heightened tension on the Korean Peninsula as the South Korean military believes that Pyongyang may be preparing for a sixth nuclear test or another form of provocation in April.

According to the Chinese Foreign Ministry, the two leaders agreed to step up communications in their talks last week, and Xi made the phone call “at the invitation” of Trump.

In response to North Korea’s latest threat of an attack on Washington, Trump said in an interview Tuesday that the United States is sending a powerful “armada” to the Korean Peninsula and also has submarines on standby.

He referred to the deployment Saturday of the U.S. Navy’s Carl Vinson Carrier Strike Group toward the Korean Peninsula, which was diverted from a trip to Australia.

After North Korea Tuesday threatened a nuclear attack in response to U.S aggression, Trump took to Twitter and stated: “North Korea is looking for trouble. If China decides to help, that would be great. If not, we will solve the problem without them! U.S.A.”

He also tweeted: “I explained to the President of China that a trade deal with the U.S. will be far better for them if they solve the North Korean problem!”

Trump has been repeating the position that his administration will act on its own if China does not show sufficient support to rein in Pyongyang amid continued provocations from the regime.

“He keeps his cards close to the vest,” said Spicer. “And as he showed last week with respect to Syria, when the president is willing to act, it’s going to be decisive and proportional, to make it very clear what the position of the United States is.”

Ahead of his summit with Xi, Trump signed off on a new policy approach to North Korea that involved increased economic and political pressure, with military options remaining under consideration in the longer term, a senior U.S. official told the Wall Street Journal Tuesday.

China’s Global Times said in an editorial Wednesday that Washington’s latest threat to Pyongyang is “more credible” in light of its attack on the Syrian air base, adding that the Korean Peninsula “has never been so close to a military clash” since the North Korea’s first nuclear test in 2006.

The editorial said that China “presumably will react strongly to Pyongyang’s new nuclear actions” and that the North “should avoid making mistakes at this time.”

The joint exercise is expected to involve Japanese destroyers and will serve as a warning to North Korea against further ballistic and nuclear tests.