Cages for new chicken farms must be bigger

Cages for new chicken farms must be bigger 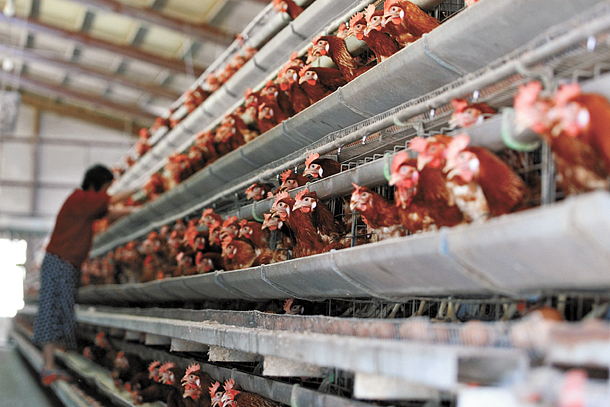 A farmer feeds chicken at a poultry farm in Korea. Most layer chickens live in cages smaller than an A4 sheet of paper and the Ministry of Agriculture, Food and Rural Affairs Thursday said the cage should be bigger to prevent avian influenza. [JOONGANG ILBO]

The government announced measures to prevent avian influenza and foot-and-mouth viruses that include bigger cages at newly opened poultry farms.

According to Ministry of Agriculture, Food and Rural Affairs Thursday, the government will require a cage holding one layer chicken on a poultry farm to be increased from the current 0.05 square meters (0.5 square feet) - roughly the size of an A4 paper sheet of paper - to 0.075 square meters.

The regulation only applies to new farms that apply for licenses to do the business in Korea. Poultry farms already operating will eventually have to adopt larger cages but the government didn’t say when.

“The government came to the decision that it is impossible for the livestock industry to continue to grow in this country unless diseases are prevented,” said Choi Myung-chul, a director at the Agriculture Ministry.

“The potential for AI and foot-and mouth viruses occurring in the country continue to rise but farms are raising their livestock in very small spaces due to economic reasons, and this gives us a fundamental problems in the quarantine process.”

The government will also restrict new poultry farms from opening in regions that are home to migratory birds in the winter, where AI outbreaks often begin. Also, government officials will prohibit delivery trucks that pick up eggs from entering poultry farms when there is a high possibility of an outbreak.

Experts have maintained that the government must strengthen its regulations on chicken cages to reduce the spread of AI.

“The AI virus that hit the country late last year spread quickly because of the feeding environment, where many birds were packed in small spaces,” said Jang Hyung-kwan, a professor at the College of Veterinary Medicine at Chonbuk National University.

“Environmentally friendly feeding won’t be able to prevent AI from occurring but it can minimize the damages.”

Some experts argued that the government’s new plans won’t solve the fundamental problems.

“If the government regulates the size of cages per chicken, it will make poultry farms have fewer chickens theoretically,” said Mo In-phil, a professor of veterinary medicine at Chungbuk National University. “Farms’ profits will be hit directly by the new regulation and they are not going to let that happen right away.”

Chae Chan-hee, a professor of veterinary medicine at Seoul National University, argued that one problem is a shortage of veterinary experts working for the government when quarantines are needed. “This makes it hard for country to preempt problems and we only react once they eventually occur.”