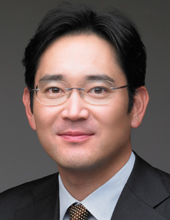 Samsung Electronics Vice Chairman Lee Jae-yong stepped down from his post on the independent board of directors of Exor, an Italian investment firm that is the biggest shareholder in Fiat Chrysler Automobiles, the company said Wednesday.

Exor’s directors decided in a meeting on April 5 in Amsterdam to replace four board members, including Lee, with new directors whose terms will last next three years. The Samsung heir-apparent, who is now behind bars on corruption charges, has been an independent director since 2012 and his three-year term was extended in 2015.

John Elkann, chairman and CEO of Exor as well as Fiat Chrysler, expressed appreciation for the outgoing board members including Lee on the company’s homepage, but didn’t elaborate on the reason for Lee’s departure.

“As we begin this next important phase in our history, I would like to extend my personal thanks to those members of the board - namely Vittorio Avogadro di Collobiano, Giovanni Chiura, Mina Gerowin and Lee Jae-yong - whose mandates have recently drawn to a close,” said Elkann. “Their wise counsel during a particularly intensive and complex period has been decisive in making Exor what it is today - a stronger, leaner and ever more international group, well placed for the challenges and opportunities that lie ahead.”

The new board of director candidates will be approved at the shareholders’ meeting scheduled on May 30.

“Lee’s arrest for the political corruption scandal must have served as a key reason he had to resign from the director post,” said an insider in the Korean chaebol community.

The 49-year-old has been banned from leaving Korea, prohibiting his external activities as top manager of the country’s most valuable conglomerate.

Exor is controlled by the Agnelli family, descendants of the founder of Fiat Chrysler, which owns a range of luxury vehicle brands such as Ferrari and Maserati.

Samsung was in talks last year to acquire Fiat’s auto parts division but dropped the deal. Harman International Industries, which Samsung acquired late last year, is in partnership with Exor.