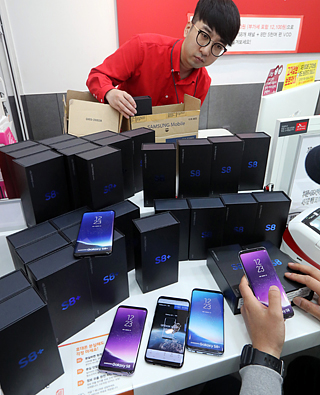 Preorders for the Galaxy S8 and its bigger cousin S8+, Samsung Electronics’ new flagship phones, hit 728,000 units in just six days and the world’s top smartphone producer expects to achieve its goal of 1 million units sold during the 11-day preorder period, a record for any Galaxy phone.

“Sales momentum [for the S8 lineup] has been very upbeat in Korea and reception overseas is better than for Note7, the previous model,” said Koh Dong-jin, president of the Mobile Communications Business at Samsung Electronics, in a media day in Korea on Thursday. The event followed global media unveilings on March 29 in New York and London.

The S8 series preorders have been robust, topping previous records. In the first two days, preorders totaled 550,000 - 2.75 times more than the Note7 model, which faced a recall and discontinuation for its fire-prone defect. 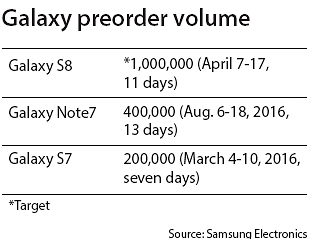 Should the current momentum be sustained, the S8 could surpass the S7’s yearly sales record of 52 million units, analysts say.

The S8 will begin shipping to Korean customers on Tuesday, three days earlier than originally planned, and offline sales will kick off on April 21.

To combat lingering fears over the phone exploding or catching fire on its own - due to the Note7 - Koh said the company tested more than 200,000 samples of the problematic phablet to find the cause and applied the least conventional measures to guarantee safety. More than 100,000 units of the new S8 were tested, he added.

“We are confident that S8 is the safest and has the best quality among all Galaxy smartphones,” he said.

When asked by a reporter who cited rumors in the market and leaked images whether the company will resell the faulty Note7s after refurbishing them, Koh said the company will discuss with various authorities how to proceed with the plan.

Bixby, an artificial intelligence personal assistant that is the most attention-grabbing feature of the S8 phones, will offer its voice recognition and control features for Korean users on May 1 - two weeks after initial deliveries. The later-than-expected availability of the voice-related service comes from the fact that its developers need more time to improve the “relatively insufficient” capability by having it evolve through “deep learning,” the mobile chief said.

The company has been heavily promoting the new AI secretary, developed by Viv Labs, an American start-up founded by Siri creators that Samsung acquired last year, as being able to offer a range of innovative services with voice and image recognition capabilities. The service is able to recognize images in the real world, links to the e-commerce shop run by Samsung, and shows corresponding images on the app Pinterest, which has forged a partnership with the tech giant.

However, it will take longer for Bixby to operate in foreign languages, including English. English will be available sometime in May and Chinese in June, the company said. Internal tests have shown Bixby’s English proficiency falls behind its Korean, analysts say.