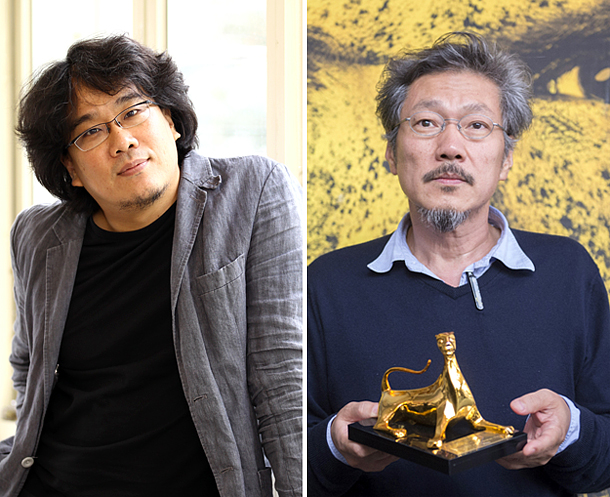 Bong Joon-ho’s “Okja” and Hong Sang-soo’s “The Day After” will compete at the Cannes Film Festival next month.

The festival announced 18 movies chosen for the main competition lineup for the festival’s 70th edition.

It will not be the first time for the two renowned directors to head to Cannes.

Bong (pictured left) was previously invited to Cannes for “The Host” (2006), “Tokyo!” (2008) and “Mother” (2009). But “Okja” marks his first movie to compete at the international film event. “Okja” which is an original film from Netflix, depicts the friendship of a girl named Mi-ja who lives deep in the mountains of Gangwon and a mysterious creature named Okja.

“I’m honored to be returning to Cannes, most especially this year with ‘Okja’ and my partners at Netflix - it is wonderful to bring their first produced original film to premiere in competition,” Bong said in a press release from the U.S. streaming service.

“The Meyeorwitz Stories,” directed by Noah Baumbach, is a movie that has been acquired by Netflix that will also premiere at the festival.

It will be the ninth time for Hong to be invited to Cannes. He has previously been invited to Cannes’ main competition three times for “Woman is the Future of Man” (2004), “Tale of Cinema” (2005) and “In Another Country” (2012).

Not much is known about Hong’s “The Day After” except for the fact that the film was shot in Korea for three weeks in last February, and stars Kwon Hae-hyo, Jo Yoon-he and Kim Min-hee, who the director confirmed having relationship with last month.

Another title of his, “Claire’s Camera,” will get a special screening next month. Putting French actress Isabelle Hupper and Kim at the center, the movie is about a writer who works as a part-time high school teacher.

Two other Korean films, “The Villainess” and “The Merciless,” will be shown at midnight screening sessions.

The 70th Cannes Film Festival will run from May 17 throughout 28.