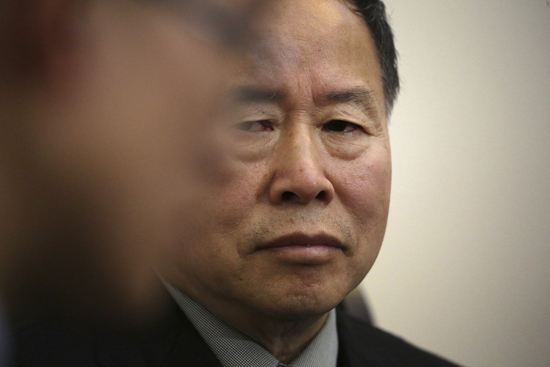 Han Song Ryol, North Korea's vice foreign minister, stares at his interpreter during an interview with the Associated Press on Friday in Pyongyang. AP/YONHAP

PYONGYANG -- North Korea's vice foreign minister says it will conduct its next nuclear test whenever its supreme headquarters sees fit.
Vice Minister Han Song Ryol made the comments in an exclusive interview with The Associated Press in Pyongyang on Friday. He also said the situation on the Korean Peninsula was in a "vicious cycle" as tensions with the U.S. and its allies deepen.

Outside experts say the North could conduct its sixth nuclear test at virtually anytime. Meanwhile, the U.S. has sent an aircraft carrier to the region and is conducting its biggest ever joint military exercises with South Korea.

Han told AP that Pyongyang won't "keep its arms crossed" in the face of a U.S. pre-emptive strike.

Many experts believe North Korea could have a viable nuclear warhead and a ballistic missile capable of hitting the U.S. mainland within the next few years.