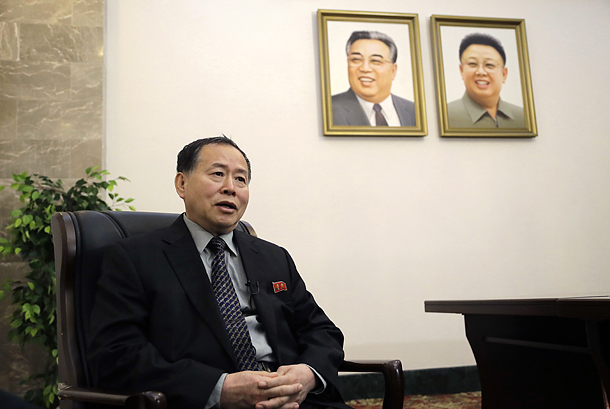 North Kora’s Vice Foreign Minister Han Song-ryol speaks with The Associated Press in Pyongyang on Friday. The official blamed the U.S. for escalating tension in the region and said Pyongyang would “confront it” with a “pre-emptive strike” if Washington “comes with reckless military maneuvers.” [AP/YONHAP]

North Korea intensified its rhetoric of hostility Friday, threatening a preemptive strike if the United States chooses military action against it.

A senior official of the North Korean government also said that U.S. President Donald Trump’s tweets are infuriating its regime.

In an exclusive interview with The Associated Press in Pyongyang, North Korea’s Vice Foreign Minister Han Song-ryol said Friday that Trump is responsible for escalating tensions on the peninsula with his tweets and expansion of military exercises.

Han complained that Washington has become “more vicious and more aggressive’’ under his leadership than under his predecessor, Barack Obama.

“If the U.S. comes with reckless military maneuvers, then we will confront it with the DPRK’s pre-emptive strike,” Han was quoted as saying by the AP. DPRK stands for the North’s official name, the Democratic People’s Republic of Korea.

“We’ve got a powerful nuclear deterrent already in our hands, and we certainly will not keep our arms crossed in the face of a U.S. pre-emptive strike.’’

He also said the country is waiting for the leadership’s order to conduct a sixth nuclear test. “That is something that our headquarters decides,” he said. “At a time and at a place where the headquarters deems necessary, it will take place.’’

Since its first test in 2006, the North has conducted five nuclear tests through September 2016. The sixth test is considered an important step to complete the miniaturization process needed to put a nuclear warhead on a missile. Signs were observed in the North over recent weeks that it was preparing for a test.

The North will celebrate the 105th birthday of its late founder, Kim Il Sung, today, and it has performed nuclear tests and other provocations in the past on important political anniversaries.

Tensions have escalated in the region over the past few days. The United States is sending an aircraft carrier strike group to the region in response to the North’s missile test last week. The USS Carl Vinson is heading to the waters near the peninsula with a guided-missile cruiser and two destroyers.

NBC News also reported Thursday that the United States is prepared to launch a preemptive strike if it is convinced that the North is about to conduct A sixth nuclear test. The strike would use non-nuclear weapons, senior intelligence officials said, according to the report. The United States has two destroyers capable of shooting Tomahawk missiles in the region, as well as heavy fighters positioned in Guam, it said.

In the interview, Han complained that Trump is responsible for the escalating tensions. He said on top of the joint military drills and the deployment of the aircraft carrier, Trump’s tweets are infuriating the reclusive communist state.

“Trump is always making provocations with his aggressive words,’’ Han said. “So that’s why. It’s not the DPRK but the U.S. and Trump that makes trouble.’

“As long as the nuclear threats and blackmail go on with the military exercises, we will carry forward with our national defense buildup, the core of which is the nuclear arms buildup,’’ Han said. “Whatever comes from the U.S., we will cope with it. We are fully prepared to handle it.’’

Military authorities in the South and the United States have said the North completed preparation at the Punggye-ri Underground Nuclear Test Site in North Hamgyong Province. Tunnel 2 and Tunnel 3 were reportedly prepped for the test.

“The North appeared to think that the situation is serious as Trump made pressuring tweets three days in a row, strategic assets were deployed to the region and the United States launched strikes on Syria and then Afghanistan,” a Foreign Ministry official told the JoongAng Ilbo.

“Trump’s attacks on Syria and Afghanistan will be a menacing threat to Kim,” said Koh Yoo-hwan, North Korea studies professor of Dongguk University.

“Trump has stressed the role of China and offered significant economic payback to resolve the North’s nuclear crisis,” said Professor Kim Hyun-wook of the Korea National Diplomatic Academy. “If the North follows through with the nuclear test or fires an inter-continental ballistic missile, the aftermath will be unpredictable, and the China option will lose effectiveness.”

China tried to calm the North and the United States. Chinese Foreign Minister Wang Yi said Friday that there will be no winner in an armed conflict between the United States and the North. “Once a war really happens, the result will be nothing but multiple-loss. No one can become a winner,” he said.