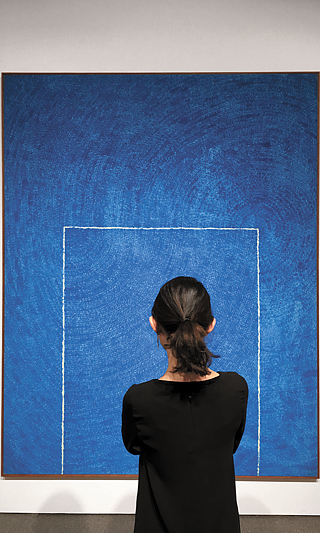 A viewer in front of Kim Whanki’s “Tranquility 5-IV-73 #310” during the preview of K Auction’s sale on Wednesday, in which the painting fetched 6.55 billion won, the highest-ever bid for Korean art. [K AUCTION]

There was both applause and sighs from the crowd at K Auction in southern Seoul on Wednesday evening, as auctioneer Sohn Yee-chun of the nation’s second largest auction house lowered the gavel, indicating Kim Whanki’s large abstract painting filled with numerous blue dots, “Tranquility 5-IV-73 #310,” was sold

The 1973 painting, which the Korean modern art master Kim (1913-74) created in New York, became the most expensive Korean piece of art ever auctioned, fetching 6.55 billion won ($5.75 million) at the sale. The applause was for that.

But there were also sighs, as some experts had expected higher bids for the painting, which was mentioned by the artist himself in his diary and has been exhibited in several important retrospectives.

“I have done two thirds of #310,” Kim wrote on his diary on April 10, 1973. “I’ll give it finishing touches after drying it completely. How desolate I feel now that Mr. Picasso has passed away.”

The modern art icon Pablo Picasso (1881-1973), whom the Korean artist admired, died two days before. But the painting’s title is not “Desolateness” but “Tranquility,” which is in good harmony with the painting’s sky-blue tone of meditating and healing qualities.

“The painting’s bright and brilliant blue color reflect Kim’s vitality and lyricism,” said Lee Sang-kyu, chief executive officer of K Auction. “It is one of the artist’s last paintings of those qualities, given that the tone of his paintings turned into gray in 1974 directly before his death.” 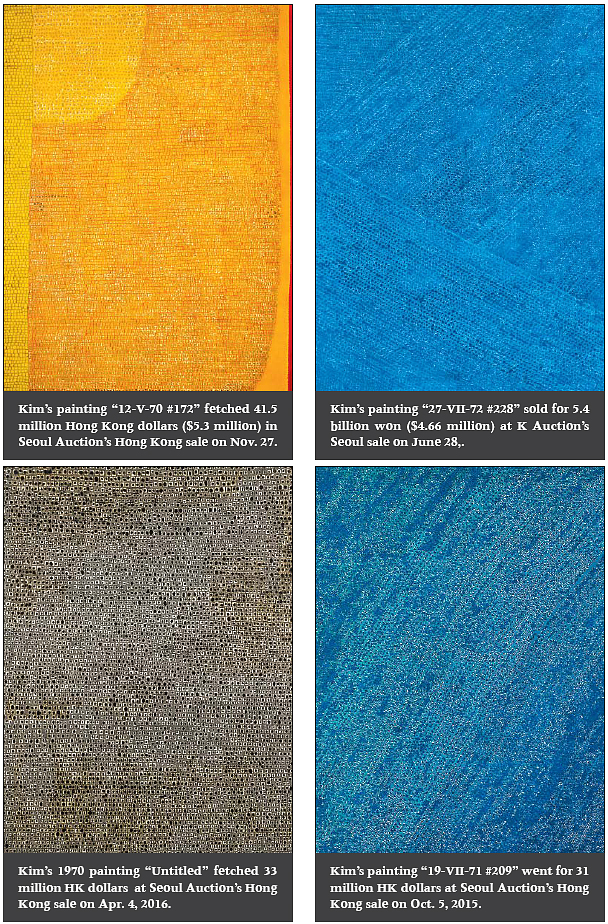 Like Kim’s other paintings created in the last five days of his so-called New York period (1963-74), “Tranquility” is filled with tens of thousands of round dots surrounded by layers of square borders that spread across and smoothly permeate the cotton on the large canvas. The dots, reminiscent of sparkling stars, are rhythmically repeated, in two concentric circles. So the painting gives the impression of two overlapping galaxies and produces the sense of the sublime.

The dot paintings from Kim’s New York period were a dramatic conversion from his former painting style - half-figurative, half-abstract visualization of Korean and East Asian motifs such as Joseon-era white porcelains in oil of a thick texture. Art historians and collectors see the change was successful. Now, all six of the most expensive Korean paintings ever auctioned are Kim’s New-York dot work.

“The clear provenance and story of “Tranquility,” confirmed by the artist’s diary, as well as its high quality, could have boosted its bid above 7 billion won, given the recent trend that Kim broke records four times in the past two years,” an art market expert who declined to be identified said. “The current political turmoil of Korea and the cancelation of a large-scale Kim Whanki retrospective in Leeum, Samsung Museum of Art, might have led local major art collectors to shrink and affected the bid.”

The two special exhibitions Leeum had scheduled for this year were suddenly canceled in March as Hong Ra-hee resigned as director of the nation’s biggest private art museum for “personal reasons,” after her son, Samsung Electronics Vice Chairman Lee Jae-yong, was arrested in February on charges of bribery in the scandal that led to former President Park Geun-hye’s impeachment.

But So Jin-su, an art market expert and professor at Kangnam University in Yongin, Gyeonggi, cited the slowing global art market and the rising tension between the two Koreas and the related powers.

“When geopolitical risk increases, collectors turn their eyes to gold or U.S. dollars from artwork which is difficult to preserve in emergencies,” So said. “The painting ‘Tranquility’ renewed the record in such bad circumstances. That shows Kim Whanki’s power.”