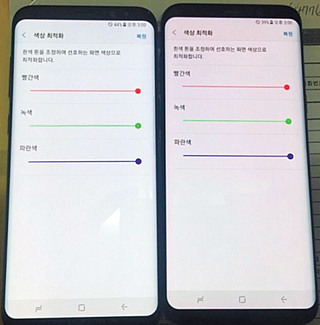 An online customer of the Galaxy S8 compares the new phone before and after adjusting the color balance setting, which corrects the reddish display. [SCREEN CAPTURE]

Samsung Electronic’ highly anticipated Galaxy S8, is stirring controversy even before it hits market shelves as customers are complaining of an abnormally reddish tint on its display.

Some consumers who preordered between April 7 and 17 and had the phone delivered beginning April 13 posted in online communities of Samsung smartphone fans and early adaptors. They claimed the S8 and its bigger cousin S8+ are unusually red, causing their eyes to hurt.

A flurry of postings contained photos comparing the Samsung phones and their earlier counterparts, sarcastically dubbing the S8 series the “cherry blossom edition.”

They suspect a flaw in the quality of the new phones, which could potentially encourage prospective buyers to postpone their purchases until the devices are fixed.

Samsung wrapped up the 11-day preorder period for the phones on Tuesday and those delivered will be connected to the mobile network today, when offline sales are also scheduled to kick off. Preorder volume surpassed 1 million, a record-high goal Samsung set for the new flagship phone. The company is hoping to recover customer confidence it lost from last year’s debacle surrounding the fire-prone Note7 phablet.

Samsung says the S8 is not faulty. The tech giant claims the display colors may vary according to users’ tastes as well as viewing angle and circumstances. A spokesman recommended adjusting the display’s color settings by increasing green or blue.

Users who are uncomfortable with the tint can return the device to the Samsung service center in their neighborhood to fix the issue or exchange it for a new phone, he added.

This isn’t the first time that consumers have pointed out the reddish tint of the Galaxy phones.

The disgraced Note7, which also had an Amoled screen, was subject to similar feedback from consumers but didn’t cause a huge issue, possibly because of the larger problem of battery fires before it was discontinued.