A racial discrimination case in Korea that went too far

A racial discrimination case in Korea that went too far 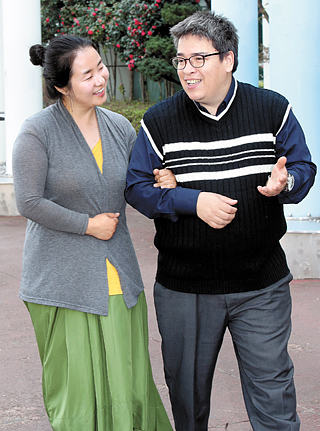 Leonardo Mendoza and Shin Jin-yeong having a friendly chat in front of a supermarket after a severe racial discrimination case involving Mendoza in Busan. [SONG BONG-GEUN]

Korea is a modern society comprising two million foreigners, yet often the attitude of Koreans toward these residents is anything but modern. The experience undergone by 11-year Busan resident Leonardo Mendoza, 44, and his wife, Shin Jin-yeong, 36, is an example of precisely this.

The couple was trying to help a child from being hit by a car at a Costco supermarket parking lot only to have the child’s grandfather scream racist slurs at them in response. Exacerbating matters, the police investigating the incident also handled the incident inappropriately. Mendoza then took to Facebook and his post about the incident went viral. The JoongAng Ilbo interviewed the couple at a cafe on April 10.

Q. What were the circumstances behind the incident?

A. We finished up shopping at the Costco at Mangmi-dong, Busan, and went to the parking lot. A grandfather, grandmother, a young mother and a six-year-old-looking child were walking and it looked dangerous for the child to be running this way and that way by himself. A car came up fast from the floor below, not seeing the child. [My wife] was startled, raised her voice and the car came to a stop a few centimeters in front of the child. I think that we saved that child’s life.

When did that moment of good will turn into a nightmare?

I thought he’d say thank you, but the grandfather immediately said, “Why are you meddling in someone else’s business!” He misunderstood the situation and thought we were upbraiding the child.

So we explained that the child was about to be hit by a car. However, the grandfather looked at my wife and inched closer. I blocked him, thinking there was going to be a problem, and then he shoved me to the ground. Then he tried to hit me. I raised my voice, “Police, police!” I didn’t think at all that I’d be disadvantaged as a foreigner.

Who called the police?

My wife was filming the scene so the young mother stole her cellphone. She started cursing at my wife. When the Costco employees came and retrieved the phone, my wife then called [the police]. Arriving 10 minutes later, the police said, “It’s nothing, but the investigation will take two to three hours. How about receiving an apology and leaving?” Even then, the grandfather was constantly spitting out racist vitriol. I asked for a proper investigation and went into the car.

Shin: I 100 percent thought we would receive protection from the police, but the grandfather’s abusive language became more severe. When my husband said “Colombia” after the policeman asked for his nationality, the grandfather went “Polish bastard.” When the policeman corrected him, saying Colombia, [the grandfather] belittled [my husband] saying, “He came from an even worse place.”

Didn’t the policeman put a stop to this?

The policeman only said, “I can separate you.” I knew that there wasn’t a racial discrimination law in Korea, but when I asked if [police] really should not protect foreigners, that policeman brushed it aside, “It’s not as if he called you a darkie bastard.” In this incident, the biggest problem was the policeman continuously disregarding the racism. By not putting a stop to the abusive language, I couldn’t help but think that the policeman agreed with it.

So what did you do?

As soon as I came home, I wrote and posted [on Facebook], “Foreigners should never expect police to side with you against a fellow Korean.” The 4,000 foreigners living in Busan who follow me shared my warning for foreigners on Facebook — it made waves. There were many foreigners who had undergone similar experiences.

Was this the first time for you?

It wasn’t. There are so many that I can’t count.

Do you think there’s a uniqueness to the Busan region?

The people of Busan are hot-tempered. They normally speak as if they’re fighting and they can actually fight well, too. When Busan people fight with each other, they quibble depending on the context.

However, to a foreigner, they start flowing with racist insults. It would end with, “You can’t even park” in Colombia, but coming here in Busan, it became “a Colombian that can’t even park.” Even so, my wife’s even been called a prostitute by an elderly person because she was in a relationship with me, a foreigner.

Is there anything in particular that you remember?

I had an argument with a young man near a highway rest-stop in 2007. Suddenly, that man went and hit me with a cudgel from the trunk [of his car]. I received a head injury. There were many people who gathered around. Most of them misunderstood and thought that she was in a relationship with the man and had fooled around with me.

There was no one who saw that spectacle from the start. Being biased, they thought I was behind the incident, thinking she played around and the Korean guy hit me, becoming angry. In these cases, they always think the foreigner is the culprit, without asking or digging deeper.

That’s correct. On Sunday (April 2) night, three days after, he apologized, saying, “We do have training, but it was very insufficient and we will expand training pertaining to foreigners.” On the next day, I called again and requested to have an internal racial discrimination training session. I went for a lecture to the police station on April 5. When I met him at the chief’s office, he said, “Of police chiefs countrywide, I am the only one with a perm. Of policemen, there are those who dislike hearing a lecture held by a foreigner. I ask for your understanding even though the audience may be small.”

When I actually went to the lecture hall, there were 250 policeman cramped inside. The policeman who handled the incident at the time attended and apologized to me in person. I learned for the first time in my 16 years living in Korea that there was an external affairs section that investigated incidents involving foreigners.

What kind of thoughts did you have?

With all that’s happened, the police chief can be called a hero. Anyone can write or post something. However, the police chief went above and beyond what he had to do and went a step further. In the end, the incident ended on a positive note. I counted, and there are 252 police departments in Korea. The change at the Yeonjae Police Department cannot stop there. The remaining 251 police chiefs must take an interest in safety measures for foreigners.

Did the grandfather apologize?

Shin: The grandfather’s demeanor had a sudden shift and he apologized at the Yeonjae Police Department, [after having earlier said], “I’ll get you thrown into prison for recording me.” In the end, we shook hands. When I said “You said Colombian bastard, but if [my husband] said Korean bastard, don’t you think you’d feel bad?” He said, “Didn’t I say sorry?”

Is racial discrimination severe in Korea?

Shin: There are so many unimaginable and painful instances. There are many foreigners who tried to help someone else and were setup by Koreans and deported from the country. I was told by foreigners close to me that when they went to the police department after being raped or abused, they were dismissed and told that’s what happens when one wears a short skirt.

Most Koreans think almost all racial discrimination has disappeared.

In speech it’s disappeared, but in reality it hasn’t. Even the policeman said, “Look how tolerant we are of foreigners.” There were many posts in the comment section that said, “[Korea] treats foreigners well.” One’s own recognition and the actual state are different.

What is the issue?