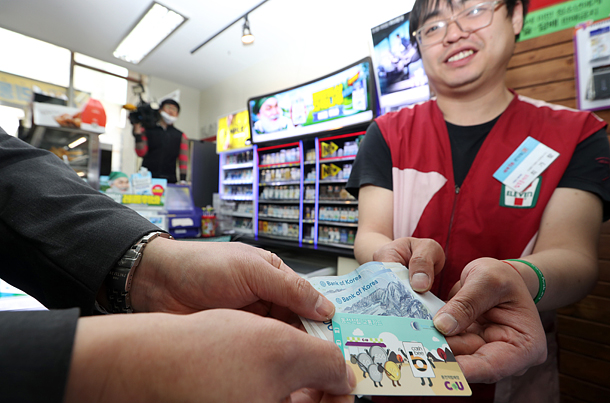 A cashier at a 7-Eleven in Sogong-dong, central Seoul, receives cash and a public transit card on Wednesday. The extra change in the transaction was transferred to the transit card. [YONHAP]

At convenience stores across the country, customers paying with cash will have the option of depositing extra change into public transit cards or converting them to rewards points. The bank’s goal is to reduce the number of circulating coins, which costs an estimated 60 billion won ($52.6 million) a year to mint.

The Bank of Korea is starting with convenience stores as an experiment. The pilot project will run through 2019, after which the bank will decide whether to expand the option to other retail outlets.

“After we review the results, we will consider whether to adopt the measure at drug stores and traditional open-air markets,” said Cha Hyeon-jin, head of the payment and settlement systems department at the Bank of Korea. 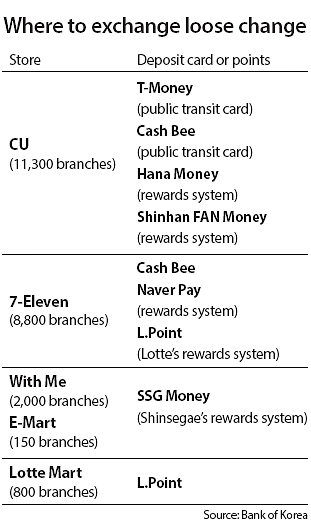 Cha added the bank is considering a system that will let people send extra change directly to their bank accounts.

About 23,050 convenience stores in Korea, including the chains 7-Eleven, CU and With Me, are participating in the project. Big discount chains like E-Mart and Lotte Mart are also part of the effort.

The public transit cards in which customers can load their extra change include T-Money and Cash Bee. Customers can also convert the change into points on cardless rewards systems run by Hana Card and Naver Pay, a mobile payment service run by internet giant Naver. Shinhan Card will start servicing CU in May, and service for L.Point, the rewards system at 7-Eleven and Lotte Mart, will begin in July.

Here’s how it works. Customers first pay for the transaction with cash. Then, if they want to load the extra change into their public transit card, they simply have to tap the card on the card reader. If they want to convert the change into points, they can also simply show a QR code from the corresponding mobile payment app.

The Bank of Korea first proposed the idea of a coinless society last December, when it pledged to expand electronic payment methods to a majority of retail outlets by 2020.

Cash transactions overall are already falling in Korea. The share of cash transactions decreased from 38.9 percent in 2014 to 36 percent last year, while credit card transactions jumped from 31.4 percent to 39.7 percent. When counting debit and prepaid cards, plastic has accounted for the most-used payment method.

There are concerns that the move might hurt mom-and-pop shops and traditional markets that still deal heavily in cash. However, Cha said the coinless efforts will not likely have a big impact on them because it is still far from eliminating cash transactions altogether.