Korea must look to Labor 4.0

Korea must look to Labor 4.0 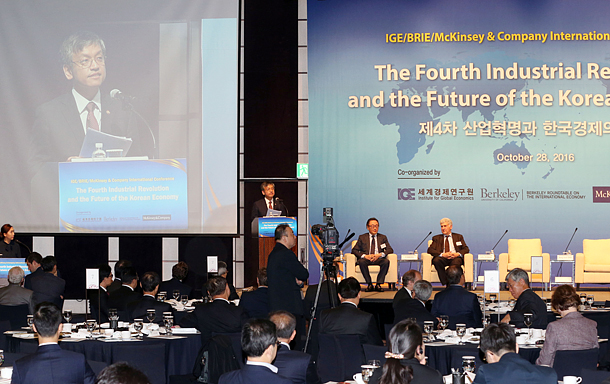 The fluorescent lights on the ceilings of the factory are turned on, and the green LED lights signal the operation of the assembly line. Machines that resemble printers cut fabrics. The fabric is put on a foot-shaped cast and turned into a shoe. Shoes are made, but no worker is to be found. The ghostly room is filled with mechanical movements. The Adidas Speedfactory in Ansbach, Germany, began operating this year. The robot-staffed manufacturing facilities can produce 500,000 pairs of shoes a year, and only 10 humans are employed here.

Korea is raving over Germany, the origin of the fourth industrial revolution. Industry 4.0 — a manufacturing sector innovation strategy jointly drafted by the German government, private sector and research institutes in 2012 — has pushed the German manufacturing industry out of the slump to new heights.

Sometimes, we are so rushed that we cannot afford to listen to different opinions, especially in an immature society. The fourth industrial revolution is approaching vehemently. As Korean society is running out of growth engines, we need the next industrial revolution to revive manufacturing.

However, no presidential candidate or government ministry is engaging in a serious discussion on mass unemployment and changes in the labor structure that the fourth industrial revolution will bring. According to the World Economic Forum, the fourth industrial revolution will remove 5.14 million jobs in the next five years. Germany’s Adidas factory is a symbolic case.

How is Germany responding? They have the same concerns about jobs but have responded differently. The Korea Chamber of Commerce held an international conference on Work 4.0 and the Fourth Industrial Revolution on April 6. Four university professors and union executives from Germany attended. According to their presentations, Germany began the tripartite consultation to resolve the labor issue and published a report titled “White Book for Work 4.0” and recommendation plans last year. They shared the understanding that Work 4.0 and Industry 4.0 were the two sides of the coin. Industries, government and workers discussed employment as a result of the manufacturing revolution and agreed to make efforts to create quality jobs.

It is not too late. The presidential candidates should work to plan the Korean-version of Work 4.0 along with the fourth industrial revolution.