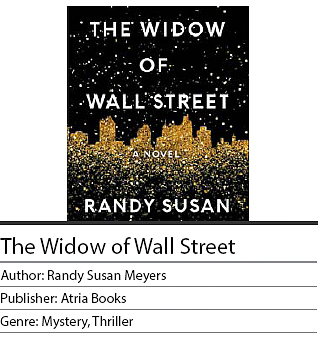 How could she? How could the wife of a Wall Street swindler, a Bernie Madoff type, not walk out the door at first word that her husband has cheated their family, friends and hundreds of others out of their life savings? How could she defend him to her own children, who lost it all with dad?

And, come to think of it, how could she have not known this crime was being committed in front of her on a daily basis, as she collected beautiful homes, boats and cars, and accoutrements of artwork, fine crystal and a designer wardrobe?

Those questions seem like no-brainers, and in “The Widow of Wall Street,” author Randy Susan Meyers poses them right at the start.

Yet as this compelling story unfolds, you realize nothing is as uncomplicated as it seems, especially when you’ve been married almost 50 years and you take so seriously your marital vows because you felt both gratitude and debt when you uttered those words.

Phoebe Pierce - frail, petite and pretty Phoebe - went through most of her adult life with blinders on, not because she wasn’t smart or capable enough to take Jake to task, but because she felt she owed him for a mistake she made during their courtship that he never knew about.

Of course, her daily life wasn’t too shabby, and for many years she lived by the mantra that ignorance is bliss. No questions about his business dealings, no questions about the hours he started to spend away from home - and the office - and certainly no questions about how they so quickly moved up the economic ladder from their Brooklyn, New York, roots to the Greenwich, Connecticut, charity-gala circuit.

And, even when she might have paused to have one of those passing thoughts, she convinced herself that her commitment to being good, doing good and spreading good made up for the corners that she eventually began to suspect Jake was cutting.

But as the Pierces’ problems snowball out of control, Phoebe never plays the victim, and it is her willingness to take responsibility for Jake’s deplorable actions that makes her a heroine in the end.