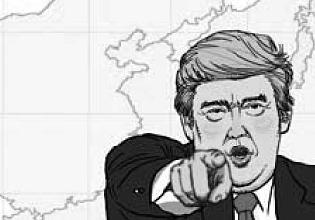 Ominous tensions can be felt on the Korean Peninsula. The United States and North Korea are pushing their standoff to the brink of war. The United States has encircled the Korean Peninsula with strategic assets. It carried out airstrikes on an airbase in Syria and lobbed the most powerful nonnuclear weapon — called the Mother of All Bombs — at an ISIS target in a remote part of northeast Afghanistan to send a strong message to North Korea.

North Korea is not easily intimidated. “We are prepared to respond to an all-out war with an all-out war and are ready to hit back with nuclear attacks of our own style against any nuclear attacks,” Choe Ryong-hae, Kim Jong-un’s right-hand man, said on April 15 as North Korea celebrated the 105th anniversary of the birth of its founder Kim Il Sung with a military parade showing off hardware including what looked like new types of intercontinental and submarine-launched ballistic missiles. On the following day, it blasted off a missile although it exploded right after take-off. The regime could carry out a sixth nuclear test on April 25, the founding day of North Korea’s armed forces.

The question is whether U.S. President Donald Trump will retaliate if North Korea continues to test him. Most experts are doubtful. They claim the so-called “maximum pressure and engagement” strategy Washington has defined as Trump’s policy on North Korea suggests it has crossed out the military option. They argue a unilateral preemptive strike can risk catastrophic destruction without achieving any military or political goal. Marine Gen. James Mattis and Army Lt. Gen. H.R. McMaster, who are Trump’s defense secretary and national security adviser, won’t agree to such highly risky military action.

James Nolt, a senior fellow at the New York-based World Policy Institute who recently visited Seoul, gave four reasons to back his argument that Trump could wage a war with North Korea.

First of all, he believes Trump, whose approval rating has plummeted since taking office, would be tempted to hype an external threat to turn attention to the outside and reclaim political and public support. He already saw his approval rating shoot up after the airstrike on Syria. Domestic political circumstances could decide U.S. military action on North Korea.

Second, Trump, who won the election through a strong pledge to deliver a U.S. economic renaissance, could use a war to quickly inflate the U.S. economy. That could be a possibility if he cannot keep his promise through infrastructure spending and a protectionist trade policy. Given the role of the defense industry over U.S. decision-making, such a theory may not be entirely bizarre.

Thirdly, North Korea poses an appealing military target. Unlike Iraq and Syria, North Korea does not have allies close around. China and Russia would protest, but could yield if the United States builds a case about Pyongyang’s threat. The United States and South Korea’s allied forces are enough to prevail over the North Korean military in a conventional war.

Lastly, a war with North Korea could be relatively cheaper than engagements in Afghanistan and Iraq. U.S. spending in those two conflicts was enormous because it had to help stabilize and rebuild two nations. In North Korea’s case, the United States would not have to worry about reconstruction bills as that would become South Korea’s responsibility.

We just hope his theory turns out to be wrong. We cannot underestimate Trump’s unpredictability. The United States won’t easily resort to such extreme action, but we nevertheless must study and be prepared for all options.

If the worst comes about, what can our leader do? Do we want someone who would side with Trump in military action regardless of the fatal risks, or someone who stakes everything — even the long-standing bilateral alliance — to stop Trump?

That is the question we should ask ourselves when we hit the polling stations on May 9. We must remember our fate hinges on every vote.

*The author is a special professor at Yonsei University.