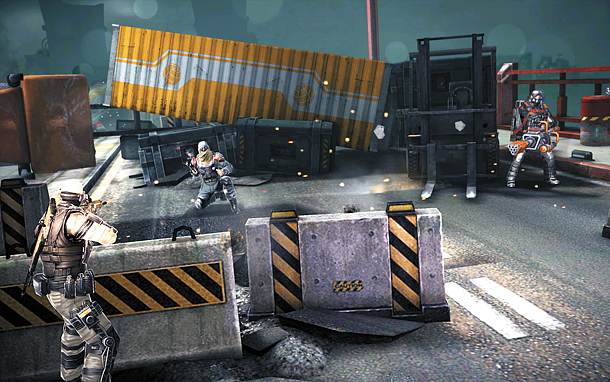 A scene from Special Force for Kakao, released on April 20 by 4:33 Research Lab. The game is a mobile version of first-person shooter Special Force, one of the most successful FPS games produced by a Korean company. [4:33 RESEARCH LAB]

Posts in an Internet forum on StarCraft jumped more than tenfold following the developer’s announcement to release the game StarCraft Remastered, a remake of the late 1990s version. The reaction in Korea to the news of StarCraft’s return was a clear indication that there is a commercial market, as well as potential standing ground, for games that had their heydays in the early 2000s.

Riding on the retro nostalgia, major game developers in Korea are bringing back their signature games. But this time, gamers will be able to play them on their mobile devices rather than on computers.

Lineage, a multiplayer online role-playing game released in 1998, was one of the pioneers of online gaming industry in Korea. It was the first game of its kind in Korea to make more than 1 trillion won ($880 million) in profit. Still, its glory days came and went, with some deciding to sign off from Lineage to play games on their smartphones.

“It’s more convenient to play games with my phone than on computers since they basically offer similar level of graphic, excitement and content,” said Sean Lee, a Seoul office worker.

Indeed, the rise of smartphones has revolutionized things. People no longer need their computers to access the internet, which means they can connect with others globally using a device that fits in their palms.

This is what motivated NCsoft, the game behemoth in Korea and developer of Lineage, to replicate the old game on a mobile platform.

“The market itself prefers mobile to computers nowadays, and along with the rising demand, the size of the mobile gaming industry has seen a great expansion,” said Kim Dong-chan, an NCsoft manager. “There was also a demand from the Lineage players that they would like to be able to play the game on their phones.”

Bringing the realm of Lineage into mobile screens would not have been possible were it not for smartphones. “With the technological advancement in smartphone industry, phones today can perform as well as computers which is why we can reboot Lineage as a mobile game,” Kim explained.

According to NCsoft, the new Lineage M, slated to be released in the first half, will be a replica of the old Lineage as gamers know it. “We are basically ‘transplanting’ the Lineage world, from computer to smartphones, including the setting and storyline,” the NCsoft manager explained. “Some parts of the interface, such as controls, will be optimized for mobile platform but it will be more straightforward and easy to play.”

Lineage M is not the only old game making its way back to the market.

Special Force, a first-person shooter game developed by Dragonfly in 2004, has also transformed into a mobile game and returned April 20. Once ranked first among online computer games for 79 weeks, Special Force is considered one of the most successful FPS games in Korea. Released by 4:33 Research Lab, a mobile-game publisher, as Special Force for Kakao this time, the game hopes to live up to the hype of its PC predecessor. “More than 500,000 people subscribed to the pre-launch reservation,” said a spokesperson from 4:33 Research Lab. The game publisher plans to later add more content.