Students learn to settle in with Korean courses

Students learn to settle in with Korean courses 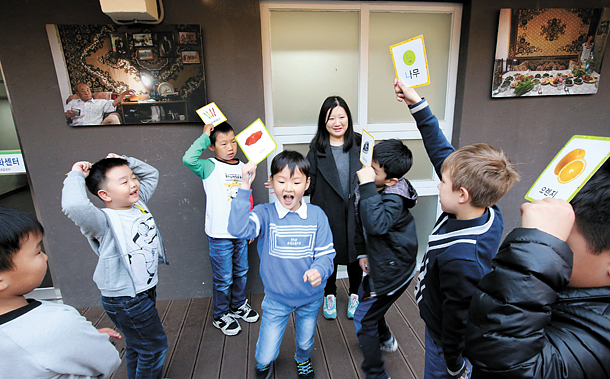 Elementary students from the former Soviet Union are learning Korean at the Koreiskie Culture Center in Danwon District, Ansan, Gyeonggi on the afternoon of April 7. Many of them are third or fourth-generation descendants of overseas Koreans, and enter school without knowing how to speak Korean. [KIM KYUNG-BIN]

When the Korean language instructor says “zeh-bruh” in Russian, the students at Koreiskie Culture Center respond in unison with “eollukmal,” the Korean word for zebra.

The classroom at Koreiskie Culture Center in Danwon District, Ansan, Gyeonggi, is filled with Koryo-in, or ethnic Korean nationals of former Soviet Union states, who enter elementary school at age 7 and attend the center’s after-school program to improve their Korean language ability. But judging by the class on April 7, they still have much to learn, as many did not know how to reply when asked, “what is your name?”

The classes were held in a mixture of Korean and Russian, with the teacher meticulously correcting the students’ Korean pronunciation.

“Just near the center there are 4,000 to 5,000 Koryo-in,” said Kim Yeong-suk, director of the Koreiskie Culture Center. The area near the center, a community known as Villa Village, is nicknamed “Koryo-in Village.”

Kim added, “and in all of Ansan City, there are about 10,000. Over the past five years, Koryo-in migrants have increased. At nearby Sunil Elementary School, there are now 120 students of Koryo-in background, but these students by and large find it difficult as they cannot read and write [in Korean].”

According to the Ministry of Education, over 99,000 migrants are attending elementary, middle and high schools in the country. Of these, 74,024 are elementary students. There were 115,000 children of such families aged 6 and below last year, but specialists believe there are far more than on paper.

According to the 2015 survey by the Ministry of Gender Equality and Family, 15.5 percent of these families said their children do not attend school.

“The 60 kindergartens catering to non-native Korean families nationwide this year will increase to 90,” said Kim Jin-hyeong, an official of the multicultural educational support at the Education Ministry, and the ministry has made this increase a priority. 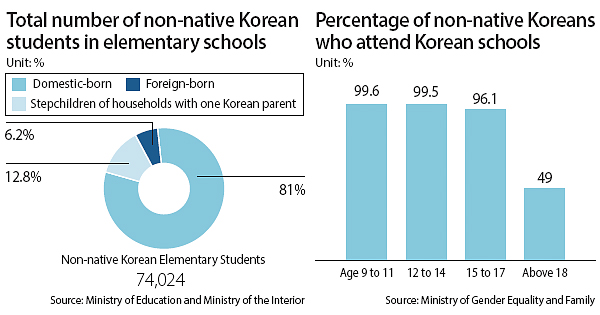 The number of preparatory schools that offer Korean language instruction to students has been on the rise. From the initial 26 schools in 2012, there were over 120 as of last year. But most educational support programs for such children are being realized as pilot schools. The Education Ministry supplements these school’s expenses only for two years before moving to another school.

Experts are calling for a more systematic approach to assist these children’s education after prep school. The Daedeok Elementary School in Daejeon is just such an example. Daedeok Elementary’s preparatory class is not only for those currently at the school, but also acts as a center for students from other schools in the area.

“Six new students enrolled in the prep school this year,” said Maeng Jae-suk, head of international culture department at Daedeok Elementary. “The plan is to teach them Korean for three to four months, or one year, and return them to their enrolled schools.”

The school also has a special class for students struggling with Korean that is popular with parents. While teaching social studies, mathematics, language and literature, teachers of this special class approach the subject matter with a focus on helping students learn Korean.

“Motivation is important for children,” said Maeng. “Their motivation to study compared to [native] Korean students is relatively low, as many came here due to their parents’ remarriage. Parents send them to schools that use Korean, thinking they will naturally learn Korean and understand Korean culture, but that’s the wrong idea.”

Fortunately, classes such as these are not the only option available to families. There is also, for example, Modoo, a library established in 2008 in Imun-dong, Dongdaemun District, eastern Seoul.

“The library is a place where one can overcome the boundaries of race and skin color,” said Moon Jong-seok, Modoo’s director, “and where parents and children of different nationalities can meet through books.”

The language club administered by the library is one such area where foreigners and Koreans can connect.

“At the Japanese language club, Japanese mothers teach Korean mothers,” Moon said. “On the days when we hold events, mothers of varied nationalities gather and clean dishes. The children make friends with one another. There’s no making fun of someone by saying one’s mother is a Filipina. There are around 30 such libraries across the country, but we need more. When that happens, more parents will be able to connect.”

There is also an effort in Korea to combine IT with family education. The Multicultural School of Love, run by Hankuk University of Foreign Studies (HUFS) in cooperation with LG, is one example of this.

In room 603 in the main building on HUFS campus at 7 p.m. on April 7, Lee So-jeong, 25, a graduate student of Korean language and literature, put on a headset, sat in front of a computer and began chatting with an 11-year-old Vietnamese child, saying, “You did well today. High five!”

Lee explained, “He did his homework, so I praised him. I’m bilingual and I use the internet to mentor 10 students.”

“While students born in Korea speak Korean well,” said Shin Min-seon, 29, a Mongolian language mentor, “they are often poor at speaking their parents’ languages. If they complete the bilingual program, it will be possible for them to speak with their relatives, who are unable to speak Korean.”

“Bilingual education not only leads to language acquisition,” said Park Jong-dae, a researcher at the HUFS Center for Multicultural Education, “but understanding of their foreign-born parents.”

The next task is to resolve the alienation children experience at school, whether it be passive or aggressive. The “Uncle Chanda” book introduced in elementary school textbooks features the story of a foreign worker from Nepal who eats with his hands while bungling the Korean language.

“On any Cosmopolitan Day, you see people wearing the traditional attire of their individual countries and preparing food. They say if they appear wearing traditional clothes, public relations will be better, and that is what I think the level of Korea’s understanding of multiculturalism is,” said Ahn Jeong-suk, 47, a Korean-Chinese instructor of multicultural awareness at the Korean Institute for Healthy Family. She has been living in Korea since 2005.

“If one reads textbooks,” she said, “there are many instances of discriminatory material.”

“There was an incident where my child was bullied at school,” said Kyoko Sato, an instructor of multicultural awareness who married a Korean man in 2005 and came to live in Korea. “But the start was the teacher’s prejudice. Nurturing multicultural sensitivity must first begin with teachers.”

“America has many different ethnicities and has discarded the notion of the ‘melting pot,’ said Shin Hye-seon, a researcher at the Sookmyung Institute for Multicultural Studies. “Recently, the concept of the ‘salad bowl’ was introduced. Like a mixed salad with many different ingredients, many different ethnicities gather, yet remain distinct. Korean language education is necessary for students, but there is no need to insist that they adopt Korean culture.”

“Though we need educational programs that nurture the abilities of students,” said Seol Dong-hoon, a sociology professor at Chonbuk National University, “we cannot continue to isolate students in these programs. We must think of long-term programs where they and Korean children can engage together.”