Speak up or sit down

Speak up or sit down 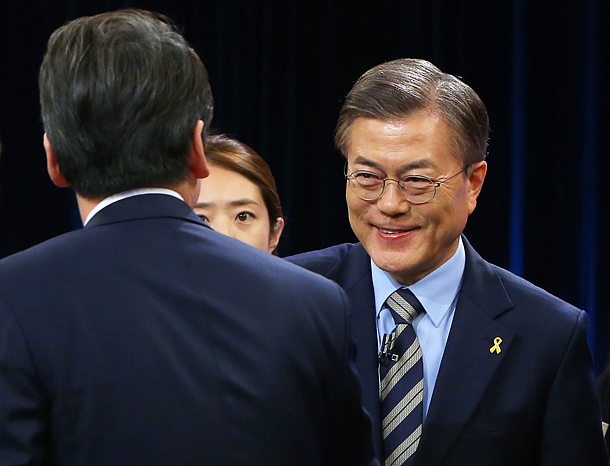 Leading presidential candidate Moon Jae-in of the Democratic Party is swept up in a renewed controversy about whether he had asked Pyongyang its opinion before Seoul abstained from a United Nations resolution on North Korean human rights violations in 2007 while serving as chief of staff to former President Roh Moo-hyun. I would like to pose the question differently.

What position would Moon take at the year-end when a similar bill is submitted to the UN? Would he, if elected president of South Korea, gladly throw in a vote of approval of the UN condemnation on North Korean human rights violations, or abstain as he did 10 years ago?
North Korea in 2017 is entirely different from the North Korea of 2007. At the time, Pyongyang showed hopeful signs that it could give up nuclear weapons if the regime’s sustainability and economic rewards were guaranteed.

Therefore, then-president Roh went so far as to propose co-sharing and co-development of the Yellow Sea with North Korean leader Kim Jong-il, despite criticism and protests about yielding the South’s side of the maritime border line. But the moves had some kind of justice, as there had been hopes for the quid pro quo strategy of achieving nuclear abandonment through economic rewards.

Today, North Korea is a state that would never voluntarily give up its nuclear weapons. To the regime’s third-generation ruler, Kim Jong-un, nuclear development has never been a bargaining chip. His goal is to advance weapons capabilities through nuclear and missile tests until he can reach the U.S. mainland.

Kim, unlike his father, was advancing nuclear missiles for actual use, not for negotiation. Washington and Seoul won’t likely be able to stop Kim with assurances of security and economic cooperation when he has hands on the button to launch a nuclear missile that could hit New York.

When times change, a statesman’s thoughts on policy must also change. Former President Kim Dae-jung drew up the so-called “Sunshine Policy” on North Korea in his firm belief that North Korea does not have the will or capability to develop nuclear weapons. His successor, Roh, designed his rapprochement policy toward the North believing the regime was using nuclear weapons as self-defense and as a bargaining chip. North Korea’s nuclear weapons today are an imminent danger to the security of South Korea as well as the United States.

That’s why the engagement policies of the past liberal administrations cannot stand today. But Moon stubbornly adheres to the vision of denuclearizing the North, and establishing peace through engagement as if it is a sacred legacy he must uphold no matter what.

Moon needs to add more creativity to his philosophy on the North by staying abreast of the times. He must not waste his time by attacking a former foreign minister in the Roh administration for whistle-blowing.

Suh Hoon, former deputy director for North Korean Intelligence at the National Intelligence Service, and Park Seon-won, Roh’s secretary on security strategy, are said to be the architects behind Moon’s North Korean policy under the coaching of former unification minister Jeong Se-hyun, who served in both the Kim and Roh administrations. The two — Suh and Park — had been security strategists during presidents Kim and Roh, but their experiences get in the way of up-to-date policymaking.

Former unification minister Jeong advised the Park Geun-hye administration to constrain from criticizing Pyongyang’s assassination of Kim Jong-nam, half brother of North Korean leader Kim Jong-un, calling it the outcome of a sibling power struggle. He was arguing the assassination was an internal matter that Seoul does not have a say in.

It is the same reasoning Pyongyang gave Seoul in 2007 when the latter asked the former’s opinion on how it should act on a UN resolution. At the time, Pyongyang told Seoul that Roh and Kim Jong-il had agreed in their summit not to interfere in internal affairs of one another and claimed that Seoul’s siding with a human rights resolution compiled by hostile forces was violation of the agreement. But the mutual non-interference pact is something that could have been possible under the Kim Jong-il regime.

Under such reasoning, Seoul should keep mum on Kim Jong-un’s order of assassination of his brother and abstain from a critical UN resolution on North Korea’s human rights conditions. Under the unruly Kim Jong-un age, however, Seoul should actively interfere in North Korean affairs. Moon must openly criticize Kim’s horridly inhumane ways of killing his own brother or oppressing civilians and his reign of terror.