Sex, lies and physics: ‘Genius’ is an Einstein tell-all

Sex, lies and physics: ‘Genius’ is an Einstein tell-all 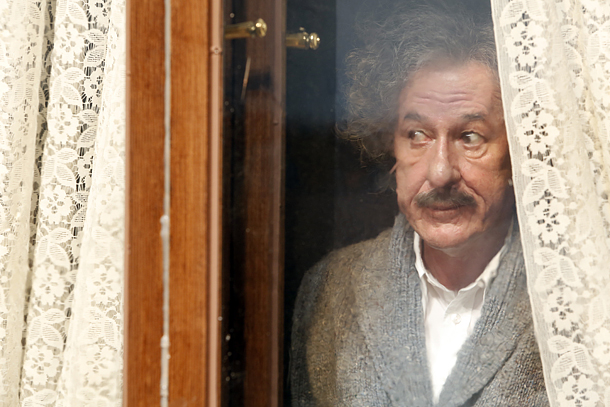 Yes, check again for Albert Einstein, who in National Geographic’s miniseries “Genius” comes across as a full-blooded, hot-blooded figure who lived by his own rules, both scientific and domestic.

The 10-part series, starring Oscar-winning Geoffrey Rush (“Shine”) as the mature physicist and Johnny Flynn (“Lovesick”) as the budding one, also places Einstein firmly in a 20th-century world engulfed by political chaos and war.

“Genius” is both entertaining and intelligent, as befits a drama that’s based on Walter Isaacson’s acclaimed 2007 biography, “Einstein: His Life and Universe,” and is the Nat Geo channel’s first scripted series.

Also credit Ron Howard, who brought another complex scientist to the screen in “A Beautiful Mind,” the 2001 Academy Award-winning film about troubled mathematician John Nash.

There are some “Mind”-type cinematic flourishes in “Genius,” restrained special effects that provide a visual sense of Einstein’s thinking and the universe as he sees it and helpful for the science-challenged.

But the series opens with Rush’s Einstein and a young woman in the throes of passion (intercut, unnervingly, with an assassination that foretells of the upheaval ahead for him and the world).

It was a deliberate choice, said Howard, who directed episode one and is among the series’ executive producers that include Brian Grazer, his longtime creative partner, and Gigi Pritzer, Noah Pink and Ken Biller are the screenwriters.

“Not only did it (the scene) appeal to us dramatically, but it also fulfilled the desire to announce to audiences right away that we weren’t approaching it in an entirely straight-forward, traditional and academic way,” Howard said. “We were looking for the drama in the story and willing to deal with Einstein, warts and all.”

“Genius” hopscotches through time as it follows Einstein flailing as an unconventional student; a young lover and imperfect husband and parent; a Jew clashing with the German scientific establishment, and as the conflicted father of the atomic age.

Rush said he was more familiar with aspects of Einstein’s world-changing theory of relativity than with the man himself, a distant figure often reduced to a beaming, wild-haired figure with brains.

“We all know the look of Einstein - it should be an emoji,” Rush said by phone from Australia. As he delved further into Einstein’s life, Rush was struck by his many sides and the fame he achieved for work unknowable by many.

“He experienced a level of global celebrity equal to that of his contemporary, Charlie Chaplin,” Rush said. But while Chaplin’s Little Tramp film character had an everyman appeal, Einstein “managed that by coming up with theories that 99.9 percent of the world had no idea what he was talking about.”