Asiana’s first A350-900 delivered to Incheon

Asiana’s first A350-900 delivered to Incheon 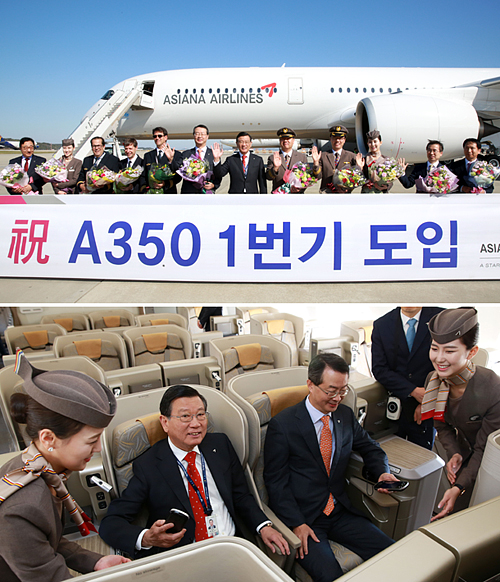 The plane took off on Monday from Toulouse, France, where its manufacturer, Airbus, has its headquarters.

Upon its arrival at Incheon on Wednesday, Asiana Airlines held a ceremony to celebrate the A350’s first delivery.

“I am confident the adoption of the A350 will strengthen Asiana Airlines’ competence in mid- and long-range flights,” said Kim. “With the A350, the company will further push efforts to increase both consumer satisfaction and management efficiency.”

Asiana Airlines is the first domestic carrier to adopt Airbus’ A350-900. Starting from the first aircraft that arrived Wednesday, the company is expecting three more to be delivered to Korea this year.

The Airbus A350 boasts 25 percent higher fuel efficiency and an eco-friendly engine that emits less sound and 25 percent less carbon compared to its rival, the Boeing 777, one of the most widely used planes for long-haul flights.

Asiana’s A350 will be the first plane to allow phone roaming services and WiFi use inside the cabin.

The plane will also have 36 seats as “Economy Smartium,” which has three to four inches more legroom than economy-class seats and upgraded service for economy-class passengers, who pay an additional fee of 30,000 to 150,000 won, depending on the route.

Over 70 percent of the airframe is composed of a titanium and aluminum alloy composite, which increases humidity inside the plane by 5 percent and reduces overall weight. Its wings are designed to drop fuel consumption by 25 percent, compared to rival aircraft.

Asiana Airlines’ A350-900 will have its first passenger flight on May 15 for the Incheon-Manila route. The company had already once changed its first flight schedule from May 15 to May 9 in March, but Asiana delayed this date to May 15 on Monday, citing the necessity for more trial flights and safety inspections.