Reviews are tepid for Galaxy S8

Reviews are tepid for Galaxy S8 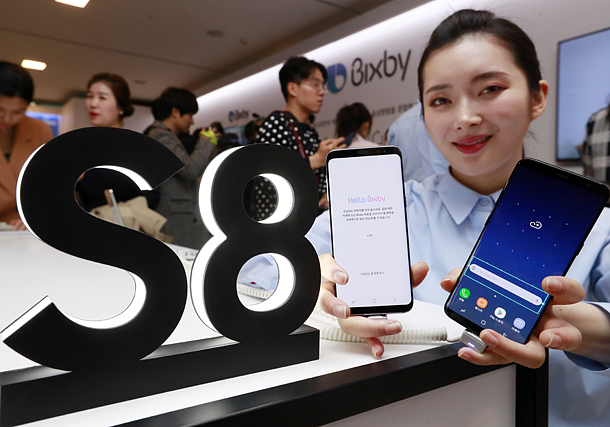 A model shows off the Bixby feature on Samsung’s Galaxy S8 smartphone. [YONHAP]

Samsung Electronics released its Galaxy S8 smartphone in Korea last week after receiving record-high preorders, but it might be too soon for the company to celebrate.

Market observers and foreign media outlets are giving prospective buyers the unusual advice of “wait and see,” mainly because its software is only half done. Samsung is touting Bixby, the artificial intelligence-powered voice and image recognition assistant that comes with the S8, as the phone’s most groundbreaking feature, but it is not yet complete.

It currently has limited ability to recognize some images and perform tasks at the user’s command - one example of a task that the company says Bixby can perform is put photos taken from today into a folder.

Bixby Voice, the voice command function, will go into full service in Korea on May 1, meaning it will have limited ability to function for English speakers in the country. Its English version will be available even later - Samsung has said earlier it might be sometime after mid-May - but some sources say its full-fledged use might be delayed to as late as till the end of spring. For now, there is no way to know how capable or advanced Bixby is going to be.

The New York Times, in a review of the phone published on April 18, said, “Broadly speaking, a wait-and-see approach is the most practical route that consumers can take with any brand-new product.” The article went on to say, “The other more disappointing thing is the fact that one of the most exciting features is not going to be fully baked at launch. For that reason, people might want to wait and see.”

Forbes wrote in a review on April 22 that Bixby is not worth using “at least in its current form,” going so far as to nickname Bixby, developed by the creators of Apple’s Siri, “inferior Google Now/Google Goggles clone.” The magazine also associated the feature with Samsung’s “obsession with its own software,” sarcastically adding, “At times I wonder if there is a job more pointless than being a Samsung app developer.”

The Wall Street Journal warned on April 18 that Apple could steal the thunder from Samsung. “There is a decent chance whenever Bixby is ready, Apple will be close to launching a 10th-anniversary iPhone with an improved Siri - and a whiz-bang screen of its own.”

After the preorder period between April 7 and 17, the Galaxy S8, unveiled on March 29, began retail sales on April 21 in Korea, the United States and Canada. Release in some 50 countries including in Europe, Singapore and Hong Kong is scheduled for April 28. Another 120 countries will start sales from May 5.

Aside from its imperfections, Bixby is creating a lot of stir. Smartphone users have criticized Samsung for releasing a software update that would prevent Galaxy S8 users from changing the function of the dedicated Bixby button on the left edge of the phone to something else. Users have characterized the move as “anti-consumer” and “locked-down.”

Several apps on Google Play have appeared to let users reconfigure the Bixby button, including bxActions and Bixby Button Remapper.