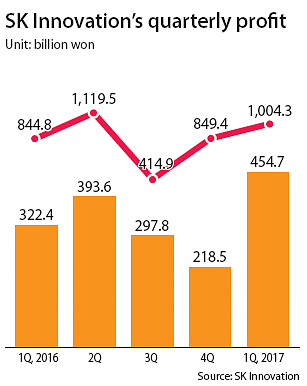 Oil refiner SK Innovation posted an earnings surprise of over 1 trillion won ($890 million) operating profit in the first quarter this year that came largely from businesses outside refining, including production of chemicals and lubricants.

SK Innovation has traditionally focused on oil refining, but since the division’s performance heavily depends on volatile market conditions like oil prices, the company has been strengthening its business outside refining to generate stable profit. It has been focusing on petrochemicals as well as new products like lithium-ion batteries for electric cars.

Last quarter, operating profit from the company’s chemical and lubricants business added up to 549.6 billion won, accounting for roughly 55 percent of the total.

Chemicals were particularly strong as products like ethylene and paraxylene, which are used to make plastic, have been very profitable. In the past five years, the company has expanded investment on facilities to produce these chemicals. It refurbished a paraxylene factory in Incheon and established plants in Ulsan and China.

SK Innovation plans to further strengthen its chemical business. In February, it decided to acquire a unit of Dow Chemical that produces ethylene acrylic acid, which is mainly used as an adhesive for wrapping products like aluminum foil. The deal is yet to be finalized as a merger between Dow Chemical and DuPont has been delayed, SK Innovation said during a conference call Tuesday.

As for the battery business, it decided last month to expand battery production capacity to 3.9 gigawatt hours, more than double the current capacity, to meet rising demand from European countries. By 2020, it hopes to have a battery that can power electric cars for up to 500 kilometers (310 miles) on one charge.