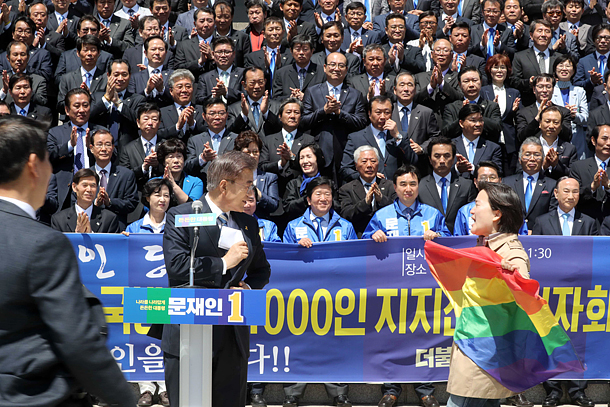 A protester calling for the passage of a law prohibiting discrimination against sexual and other minorities runs toward Democratic Party nominee Moon Jae-in during a press event in front of the National Assembly on Wednesday. [YONHAP]

“Maybe it has to do with him being a Catholic, I do not know for sure,” said the official. On Moon’s agreement with Hong that gays in the military were weakening the country’s defense, the official clarified that Moon was referring to sexual assaults in the barracks by aggressors - straight or gay.

Kim Sung-nam, an official at the AIDS management center at the Centers for Disease Control & Prevention (CDC), said Hong’s claim that homosexuals were responsible for AIDS spreading was wrong.

“Our epidemiological survey into AIDS infection shows that there are more infections of AIDS among heterosexuals than homosexuals,” the official told the Korea JoongAng Daily. Data compiled by the CDC of AIDS infected patients back up that claim. In 2015 alone, there were 1,018 newly registered HIV/AIDS patients. Of the 1,018, 288 said they had contracted the virus from sexual contact with the same sex while 364 said they contracted it through an encounter with the opposite sex. 366 didn’t say how they had contracted the virus.

Hong’s claim that there were 14,000 people infected with AIDS in the country also turned out to be wrong. According to a CDC report, a total of 10,502 people were registered as HIV/AIDS patients as of 2015.

An anti-discrimination act banning the mistreatment of people because of their gender, educational level, nationality, color of skin or sexual orientation, among other factors, was first proposed by the Justice Ministry in 2007. But it faced a fierce backlash from conservative Christian groups concerned that the law would end educational programs aimed at preventing homosexual behavior. The anti-discrimination act has never been put to a vote.