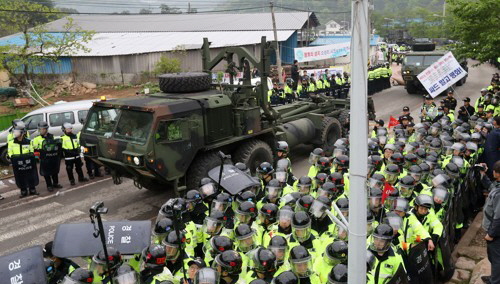 U.S. troops in South Korea began installing the equipment of an advanced antimissile defense system at a site in a southeastern region of the country early Wednesday morning, facing fierce protests from local residents.

A joint environmental survey required under the bilateral Status of Forces Agreement (SOFA) is not done yet, according to officials.

Six trailers reportedly carrying the high-profile radar of the Thaad system and other elements were seen entering the site.

USFK issued no statement on the sensitive issue, but South Korea's Ministry of National Defense confirmed the start of the full-scale deployment.

"The measure this time is meant to secure early operational capability by positioning some available parts first at the site," the ministry said.

The two sides will proceed with the environmental assessment and construction of relevant facilities, it added.

The two sides plan to put the Thaad unit in full operation by the end of this year, according to the ministry.

Strongly protesting the move of the Thaad equipment to the site, a group of residents in the town clashed with police.